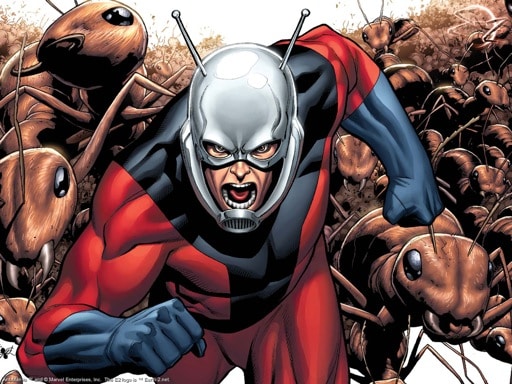 But I’ve been proven wrong before, and if there is one character in need of a cultural reboot it’s Ant-Man. Edgar Wright might be the guy for the job.

For those unaware of the news, word has come down the pipe, via MTV, to expect an Edgar Wright-helmed Ant-Man movie in 2015.

Basically, Ant-Man is a scientist who gains the power of Rick Moranis in “Honey, I Shrunk the Kids.” He can shrink himself down, and then also control ants. He can also make himself a giant, and later assumes the name Giant-Man. So, size-altering powers. Below is a storyboard recreation of some test footage shown last year, back when the Ant-Man movie was more rumor than fact. It’s pretty much what you would expect, but maybe the real thing would look cooler. Regardless, it’s still an ant-sized man being a superhero.

Honestly, I’ve never liked Ant-Man. I liked him in The Ultimates (Marvel’s Ultimate reboot universe version of The Avengers) only because he was such a great source of drama. He beats his wife, The Wasp, and Captain America ends up kicking his ass in a very John Wayne way.

Edgar Wright makes funny movies, for the most part. Or, at the very least, they’re irreverent: “Sean of the Dead,” “Hitchhikers Guide to the Galaxy,” “Scott Pilgrim,” etc. Though, I didn’t like Pilgrim’s adaptation (loved the comic), nor did I like the Hitchhiker adaptation. Still, maybe a boost of humor might work. But this would probably mean disregarding out the wife beating storyline, which I think would be a mistake if they want an awesome Avengers 3 scene (makes Captain America even more of a badass, seriously).

Along with Ant-Man, embedded in the story is an odd reference to Doctor Strange. MTV doesn’t really make it clear whether the Kevin Feige’s (Marvel Studios President) quote is in reference to Ant-Man or as an entirely different property. To me, it reads like the interviewer was just throwing out names and Doctor Strange got a reaction — so they threw it into the same article.

Doctor Strange is such a hard character to swallow, as is the Scarlett Witch and every other magic-based character. It doesn’t really “fit” with the superhero thing. If they added him to the Ant-Man movie it would be the wackiest Marvel movies. You have a guy shrinking, controlling ants, and a sorcerer casting spells in the background. What? Doesn’t make sense. But maybe embracing that absurdity is what would make the concept executable.

We’ll have to wait a while to see. Ant-Man is tentatively set for 2015, along with Avengers 2.