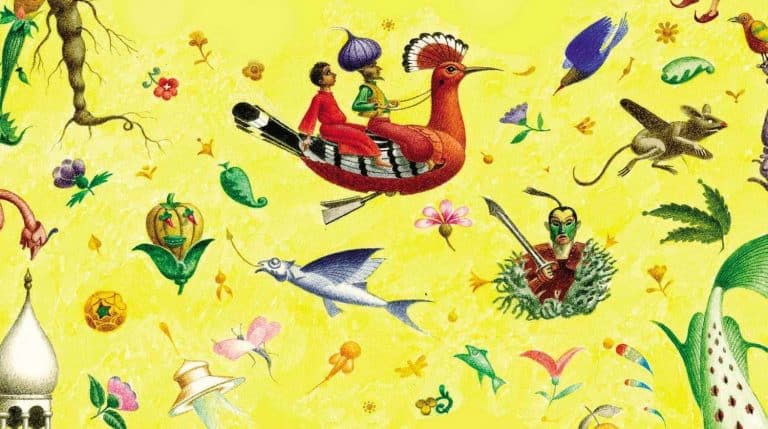 Haroun and the Sea of Stories by Salman Rushdi (Review)

In reading Haroun and the Sea of Stories by Salman Rushdie, one might ask themselves: what would you die for?

It is a question that we’ve all probably considered from time to time. The common answers may be a spouse, your child, a family member, maybe even your country.

Many of us may go so far as to say an ideal or maxim. I know I’d like to think there are universal truths that are worth dying for. But when push comes to shove, how many of us would actually put our neck on the line? When it would be easier to just keep our head down and survive.

A Brief World History of Speaking Out

History suggests there are very few of us willing to stand out and stand up for things we believe in while facing possible death.

Early during Hitler’s rise to power in Germany in the 1930s, many people spoke out about the dangers of the ideologue. However, as time wore on, and more and more people were killed or arrested, most people just tried to survive, protect their jobs and families, and carry on.

This is not an uncommon response. Some interviews suggest that many North Koreans don’t care for Kim Jung Un, but most know that they cannot do anything about their oppressor without risking harm to themselves or their family.

If we are really honest with ourselves, most of us probably aren’t willing to die for many things that don’t directly threaten our day to day lives or the people closest to us.

That’s what makes Salman Rushdie, and the circumstances around his novel Haroun and the Sea of Stories so intriguing.

Context of Haroun and the Sea of Stories by Salman Rushdie

Salman Rushdie is controversial. And none of his work was more controversial than his novel The Satanic Verses, which was released in 1988.

The Satanic Verses was inspired, at least in part, by the life of Muhammad. This is a subject forever bound to find controversy. Just ask Trey Parker and Matt Stone. The creative duo attempted to depict Muhammad in a South Park episode. Then, Comedy Central censored the episode due to death threats.

Some in the Muslim community saw Salman Rushdie’s novel The Satanic Verses as blasphemous. Ironically, The Satanic Verses explores how relativistic faith and religion can be, based on the region you were born and the culture you are exposed to.

However, that message didn’t seep through to those who were upset with Salman Rushdie’s art.

The controversy reached a crescendo in February 1989, when the Ayatollah Khomeini issued a “fatwa” on Salman Rushdie.

This fatwa gave Muslims all over the world, a license to kill Salman Rushdie, and several acts of violence followed, including threats to bookstores and a few bombings of bookstores and publications around the world, primarily in the U.K.

Salman Rushdie went into hiding for nine years during this period. The first book he wrote, under all of this pressure and fear, was a children’s novel that would function as an allegory for tyrants, free-speech, and political relations around the world. Salman Rushdie would call this book Haroun and the Sea of Stories.

Overview: Haroun and the Sea of Stories

In the children’s novel Haroun and the Sea of Stories by Salman Rushdie we see young Haroun and his father Rashid as they go on an imaginative adventure to the earth’s hidden moon, Kahani.

A constant question asked throughout this story: “what is the use of stories that aren’t real?” Which of course would’ve been a very real question for Salman Rushdie’s real son. Salmon Rushdie dedicated Haroun and the Sea of Stories to him. The fatwa separated him from his father. A fictional story put Salman Rushdie, and his family, in very real danger.

On this hidden moon, Kahani, Haroun finds two warring factions, The Guppees and the Chupwalas.

The Gups, live on the half of the moon where there is always sunshine, and free speech abounds.

The free speech sometimes slows down their efficiency, allows the citizens to say quite nasty things about the sometimes incompetent aristocracy. It also does not prevent this society from being sexist or ignorant, but it is obvious that The Gups are mostly free and relatively happy.

The Chups, however, live on the half of the moon where there is always darkness. A religious cultist/tyrant named Khattam-Shud rules them.

The inner circle of Khattam-Shud follows the cult of Bezaban, an ice-idol who has his mouth sewn shut. No one in the Land of Chup may speak. They and their way of life are pretty clearly the ying to the Guppees’ yang.

As we meet some of the citizens of Chup though, we find that they are really sort of nice and thoughtful, and they just want to be free of the tyrant as well.

And Haroun begins to see the beauty in the dark side of the moon, as well as the light.

Without spoiling how Haroun and the Sea of Stories ends, it is clear that Salman Rushdie is playing with an allegory about free speech, its function in modern societies, both democratic and despotic, and trying to rationalize his own decision to risk his life in the name of creativity and speaking truth to power.

Ultimately, free speech allows the Gups in Haroun and the Sea of Stories to overcome their struggles. In a way that silence and fear never can. This is a book that anyone who believes in free speech as a means to construct a society that could one day work for all of us needs to read. Even if free speech doesn’t function perfectly right now.

Conclusion: Haroun and the Sea of Stories

Through Salman Rushdie’s first-hand experience, he lends credibility to the idea that some ideals are worth dying for. However, luckily Salman Rushdie didn’t die.

The Iranian government backed the fatwa for 10 years. But in 1998 eventually dialed back their support under the new leadership of Mohammed Khatami. Still, there are some Muslim extremists that as of 2016 were raising money for the fatwa.

Despite all of the pressure and fear that Salman Rushdie must have felt during this time, Haroun and the Sea of Stories by Salman Rushdie is a testament to the belief that free speech is worth risking your life for. And that it’s the only thing that will save humanity from returning to the dark.

C. Alexander is an existential poet and perspective blogger living in Providence, RI. His book, The Cosmic Hello: Lessons in Codependence, is now available on Amazon. He has an upcoming poetry collection, Islands and Men being released by Finishing Line Press in early 2020. Sign up for his newsletter, Poetry and Pop Culture here.
All Posts