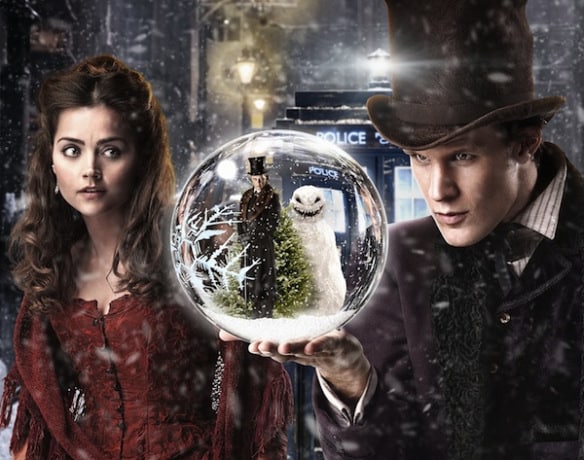 Doctor Who is prolific with its holiday specials. There’s a common problem with TV shows and the holidays; it usually results in schmaltzy storytelling and reliance on ready made symbolism. The good Doctor, however, consistently uses the showcase — it is commonly during a episode break — to accelerate the overall plot or concentrate on good ol’ fashioned excellence.

“The Snowmen” was a delight, though I could have done without the titular baddie. I honestly had to hold back laughter during the first sight of an army of snowmen attacking unsuspecting Victorian Londoners. The main reason for my satisfaction was Clara Oswin Oswald, played again by Jenna-Louise Coleman.

The Doctor’s “companions” (sidekick, to the uninitiated) come in several shades, but there’s one attribute present in every iterance: they’re not as clever or superlatively efficacious as The Doctor. Perhaps the only exception is River Song, however she has two things disqualifying her from being considered in the same category as other companions. One, her connection to the TARDIS gives her Time Lord DNA, so to speak. Two, she had tutelage from the good Doctor before we even met her. Another, possibly, could be Captain Jack Harkness, but he is from the far future, can’t die permanently (an actual character trait), and a time traveler himself. This time travel thing seems the astrophysical equivalent to a Vitamin B shot.

Now, this universal disparity is acceptable for literature. It’s not sexist (Rory was quite the moron) or anti-human (everyone is a moron compared to The Doctor). It’s simply another example of the Sherlock Holmes device: Watson makes Holmes look bigger and better while connecting to the everyman. Still, one of the great appeals of Doctor Who is not only that The Doctor himself gives us a bright potential to aspire to, but he also espouses the potential for greatness in all of us. So, why not see that potential realized?

Well, Clara is it. We saw her first in “Asylum of the Daleks,” where she was able to accomplish feats of which The Doctor only dreamed. I won’t spoil it. Go find it. I also won’t spoil the outcome, but let’s just say it was heartbreaking. Here, she’s just as bright, though not as technological, which only showed her intellectual acuity all the more by stripping away its aid. One of the more subtle ways she shows this is by putting her own twist on the usual exclamation of “It’s bigger on the inside” when first encountering the Tardis’s interior. She says, instead, “It’s smaller on the outside.” Now, this might have seemed like a grin-grasping line, a wink at the fans, a writers’ room joke, etc. But, consider it for a moment. The TARDIS is not a police box. It has no function as such. It is a time and space traveling craft. Its purpose, its utility, and its actual identity is the INSIDE and NOT the outside. Its outside is a trick. If you were to speak in terms of essentials, you would not put the emphasis on the trick. This is clear to any sober person not in shock from seeing the laws of physics break. Yet, she states it despite having the added handicap of possessing only pre-Sci Fi experiences.

Also, I liked her personality, especially as it relates to The Doctor. The show’s sidekicks seem to fall into one of or a combination of three categories: coquettish, cocky, or captious. Clara is none of these things. She flirts but pleasantly; she’s self-assured but never feels the need to state it; and she doesn’t have a chip on her shoulder big or small. She’s just clever and charming. She’s The Doctor without the neediness for approval or moral impetus.

Now, she is The Doctor’s new companion, though obviously not in the traditional sense (trying to toe a spoiler line somewhat here). But, for those who watched it, was I the only one incredulous when The Doctor offered his key? It seemed unreal to me, because she is so independently capable that I saw her more as an equal than a sidekick. I only hope her story ends well, as I have a sneaking suspicion that it’s against most modern writer’s fiber to let a shining example go undimmed. Regardless, I look forward to the remainder of the Series/Season 7, as she should be prominent if the previews are accurate. I just hold out for a resolution that doesn’t see her greatness, her character’s personal appeal, being explained away by being a long lost Time Lord or some pseudo-science something or other.

Doctor Who will return to BBC in April 2013 with Matt Smith and Jenna-Louise Coleman (yay!) with Steven Moffat again at the helm.

I’m on my phone so forgive any typos. As we all know iOS is famous for that kind of stuff.

I have to say that I have never loved Matt Smith so much as I did in this episode, nor have I enjoyed a Christmas special as much since TCI. It pains me to say it, since I’m not a fan of what the Moff has done to the Whoniverse, but it was a wonderful episode. I only have a couple of problems. One, why did Clara just stalk him with little provocation and b, why was she working as a governess. Other than that she was the perfect blend of cheeky, just as she was as Oswin. I’m looking forward to the rest of series 7. I’ve not liked a companion this much since Rose.