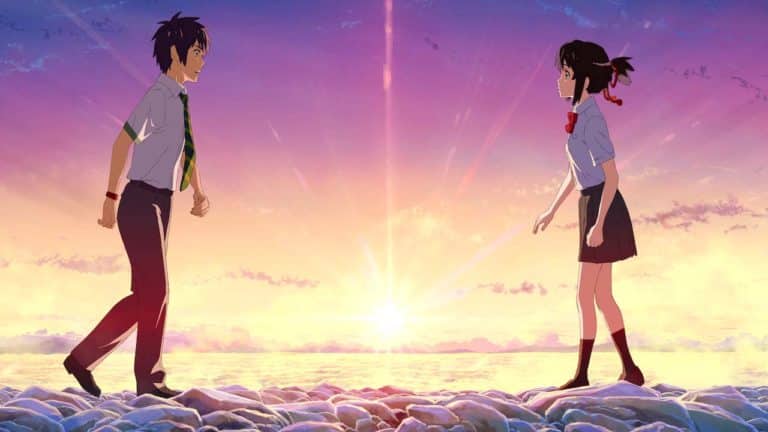 In the anime Kimi No Na Wa (Your Name, 2016), rural high school girl Mitsuha Miyamizu wakes up one day to find she has exchanged bodies with a Tokyo high school boy, Taki Tachibana.

They communicate throughout Your Name by writing messages on paper. Or their respective phones. Sometimes on each other’s skin. However, their encounter stops as a meteor hits. Unwilling to sever the relationship they’ve built over the course of Your Name, Taki finds the town where Mitsuha lives by tracing his remaining memories.

It turns out that Mitsuha and Taki’s body/mind connection stretched across a gap of three years of time and space. And Mitsuha died in the meteor crash.

The idea of swapping bodies has long been an alternative script for Hollywood, but this time director Makoto Shinkai turned a trope into magic in a seemingly simple and idiomatic story.

The meaning of knotting is also in line with the ancient Chinese saying of “a thousand miles of marriage.” Tangled tangles of red ropes have been given the mystery and eternity of time here.

The interweaving of fantasy and reality in Kimi No Na Wa (Your Name) makes people feel that the animated film’s plot can almost be real.

Your Name ultimately asks, how long will you wait for the person that you are dreaming of?

Maybe there is a reason why director Makoto Shinkai’s film animation is selling well. This movie clearly states the price to pay for persistence. Loneliness, confusion, loss. As a result, the film Your Name has found decent success.

Throughout the film Kimi No Na Wa (Your Name) the tension of the story changes from simple to complex. Then, complex to simple. It is not a deep metaphor of philosophical intentions. Just as simple as it can be.

It is pure love that is ignored or even forgotten by many people. This kind of love without any impurities has been seen in many of Makoto Shinkai’s previous works. But those past works are not comparable to this new masterpiece.

Your Name keeps the tension until the last moment. In the end, the movie Kimi No NaWa (Your Name) makes people really feel the pure love that we all have been longing for.

Reine Wong is a movie lover who is passionate about sharing her own insights on unique and sophisticated movies. She believes that there is a great deal for us to learn from movies, which can open our minds and help us be better in our reality. Watching movies is a way to connect us together on a deeper level, and having reflections on it is a practical way to look at our life from a different perspective.
All Posts