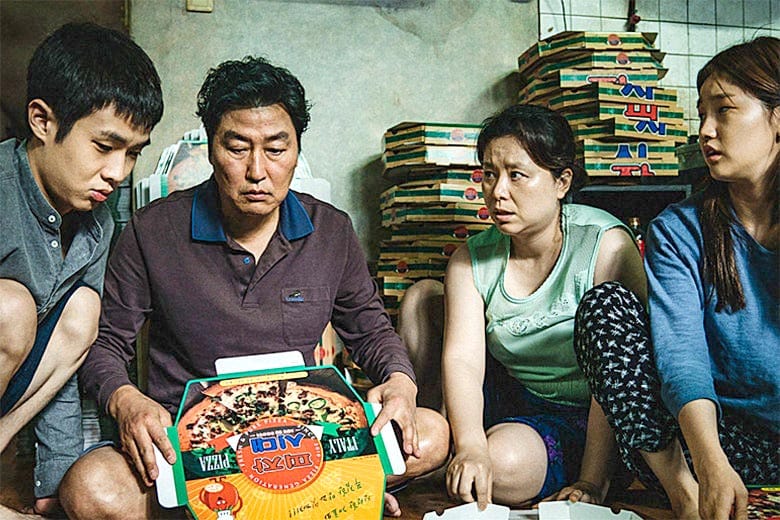 I experienced South Korean auteur director Bong Joon-Ho’s Parasite without even a vague idea about its plot, genre, or its significance.

How rare is it you arrive at a movie theatre, enter the screening room, seat yourself and wait for the projector, having neither heard, nor seen anything about a film you’re about to watch, like me and so many others have with Parasite (2019)?

We’re in a time where the majority of box office opening success is dependent on a percentage.

Where you must avoid any social media at all costs if you hope to have nothing spoiled. Where you try to watch a trailer online only to have another trailer play before it, and before that, a micro trailer for that trailer, and when you eventually watch the intended trailer, scenes from the second, even third act of the film are spoiled in teasing blips.

A personal favorite director was at the helm and the initial response was fiercely positive. That’s what little I knew before I watched the film Parasite (2019).

And boy, knowing only those two facts was its own luxury. For that reason, I’ll leave out a synopsis and hopefully, if you’ve been just as lucky, you can continue steering clear of any description yourself until you’ve seen the film.

I think to say this is director Bong Joon Ho‘s best feature so far, is relatively objective.

In other words, it’s a fact.

Despite their own brilliance and own social-commentating glory, Memories of Murder, The Host, Snowpiercer, Okja, and so on, don’t quite reach this same level of completeness in their craft.

Like a few of his prior feature-length film achievements, director Bong Joon Ho uses Parasite to, again, address Capitalism.

The divide in social class. The intense contrast and unruliness between wealth and poverty. And although, the film is set in South Korea, Ho is referring to an economical system shared by many of the largest parts of the world.

The film succeeds because its message is distinct, not through bordering-fourth-wall-breaks or overt lines prepared to be quoted, but instead because it paints two realistic pictures. Each one antithetical to each other.

Politics withdrawn, Parasite is still a film masterpiece. Less common than having a film spoiled is witnessing a film which snatches elements from a variety of genres. And a film that uses them in such a way that they fit perfectly together.

You can see influences of different film genres, such as thriller and horror in the movie. Above those, there are also beams of comedy built within Parasite’s construct. A construct both placed and shot beautifully through the camera lenses.

It’s smart humor. In fact, the film has several intentional laugh out loud moments, which are masterfully timed so that they never harm the overall tone.

The disturbing and the emotional parts of the film arrive without so much as a scratch.

While they are all exceptional, if there is one stand out performance here, it’s Song Kang-Ho.

Once again, he has proven how versatile he can be. His performance in Parasite is less palpable than you might have seen before and more brooding.

All the while his character watches, as he’s drenched by the central plot’s vigorous downpour, a mighty concern is burgeoning inside of him.

If you’re not often one for watching foreign language films, I understand. It can be easy to be put off by the concept of subtitles.

It’s almost deferred the way animated films are, for the quick opinion they’re all for children. Well, it’s easier than it might seem to find yourself invested in a film where the dialogue is little-to-no-help without a translation along the bottom. Especially, the film Parasite.

Give it a chance. You’re missing out on so much otherwise.

To summarize, what do I think?

I think Parasite is the Best Picture of the Year, one of the best films of the decade, and it’s one of my favorites movies of all time.

What did you think of the film? Let us know what you thought of Parasite in the comments below.