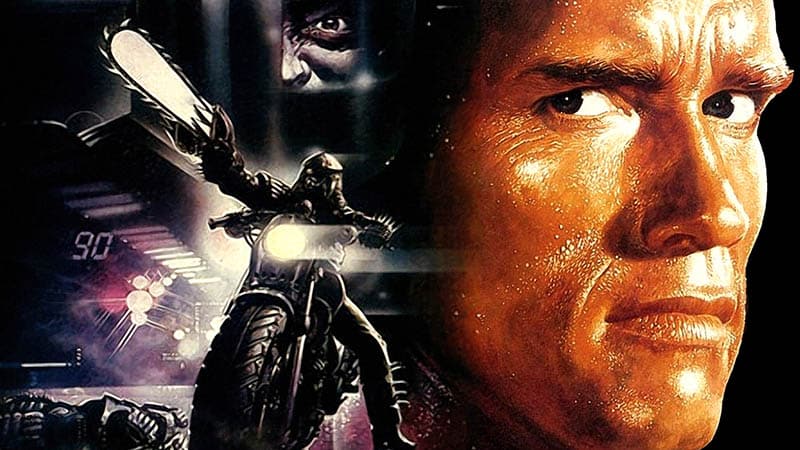 As we enter into the economic turmoil currently nicknamed The Great Virus Depression, and wealth inequality simultaneously rises to an all time high, the 1987 science fiction-action film The Running Man is eerily prescient.

Reality TV is all the rage. The economy is in the tank. And all anyone wants to see is some death and mayhem.

Set sometime between 2017 and 2019, the movie centers around a TV show called The Running Man, where “runners” (imprisoned convicts) vie for their freedom in a lopsided death match against the show’s gladiators.

Arnold Schwarzenegger plays Ben Richards, a wrongly convicted police helicopter pilot. Since the dystopia he finds himself in has experienced an economic collapse, the powers that be have decided to forego the electric chair for criminals and instead pacify the population through bloodsport.

Along the way, Arnold manages to become embroiled in a nationwide, underground revolutionary movement. In addition to killing gladiator after gladiator in self-defense.

As far as ideas go, it’s fantastic and strangely close to home.

The TV angle alone summons viciously poignant parallels to modern Reality TV. And the viciousness of the crowd during the hunt is chilling.

It’s one of those ideas where it seems absurd, until you live long enough to see it come to pass.

Of course, credit goes to Stephen King. The Running Man was based on King’s 1982 novel of the same name, published under the pseudonym Richard Bachman.

The basic idea of a brutal televised manhunt is the same. Although interestingly enough the “contestants,” vying for money instead of freedom, are allowed to go anywhere in the world in their attempt to escape.

It would have been a much different movie, and probably a bigger budget. One of the few times we’d actually love to see a remake. If for no other reason than to see the novel’s globe trotting scope on the big screen.

Writing of The Running Man

The screenplay ain’t Shakespeare, let’s put it that way.

While Stephen King’s writing is innovative and relatable, albeit under the fast and loose nom de plume of Richard Bachman, the movie adaptation was not written by his hand.

The Running Man is full of hacky action tropes. Cheesy one-liners. Puns aplenty. And so much winking at the camera you might just mistake it for a modern movie.

Of course, can we expect a sterling script in a movie so clearly meant to delight with over-the-top antics and action? Pathos is not typically paired with punches, especially circa 1987.

Yet, even by 1980s action movie standards, the writing in The Running Man is not that good.

This is arguably peak Arnold Schwarzenegger. He’d just come off Commando and would also star in Predator the same year as The Running Man, 1987.

He’s got English under control. He knows how to use his charisma for the camera. And he knows his strengths.

Honestly, Arnold Schwarzenegger could hardly do better than he does in The Running Man. For an action movie of this era, you can’t ask for much better.

Maria Conchita Alonso as Amber Mendez doesn’t really fumble anything, but she’s not given a lot to work with. Although, unlike Arnold, she doesn’t do anything to compensate or stand out.

Yaphet Kotto as William Laughlin is basically just Sidekick #1. He doesn’t bring anything special to the role.

Marvin J. McIntyre as Harold Weiss shows promise because he’s not your typical actor and there’s a sort of everyman/every engineer quality about him. But mainly due to the script, he doesn’t rise to any great heights.

The gladiators/executioners consist mainly of stunt casting and celebrity cameos. It’s practically a precursor to The Expendables.

All of them bring absolutely nothing that their empty sequined costumes couldn’t have brought to their scenes.

Direction of The Running Man

According to the book Total Recall: My Unbelievably True Life Story, Arnold Schwarzenegger has said he hates the direction and that Paul Michael Glaser “shot the movie like it was a television show, losing all the deeper themes.”

While we like the angle of shooting some scenes like TV, seeing as how it’s a TV show being portrayed, we understand where Arnold Schwarzenegger is coming from (something we never thought we’d say).

Paul Michael Glaser is best known for playing Starsky on the 1970s detective show Starsky & Hutch. However, he did direct a few other films than The Running Man.

Among them, The Cutting Edge and Kazaam.

No wonder The Running Man features such moving and poetic sweeps of pathos.

It’s loud. It’s flashy. The set designers, wardrobe crew, and the rest of the art department must have felt like they’d died and gone to 1980s heaven.

Does this make it bad or good? We’ll leave you to decide.

Either way, even if the color palette and artistic instincts are trashy fad homage, it’s well done hack work. It has style and panache.

Plus, it matches the larger than life overacting and cheesiness of the direction.

Fun Facts About The Running Man

Little bit of trivia you may have been able to guess. The Running Man features not just one but two future governors–Arnold Schwarzenegger and Jesse Ventura.

Something you may not know: Christopher Reeve of Superman: The Movie (1978) fame was in the running before Schwarzenegger won out.

We know we shouldn’t be. We know it’s like eating nothing but Cocoa Puffs for a month straight.

Yet, let’s admit it, sugar is awfully good.

We don’t feel great about outright recommending The Running Man, so we won’t. But instead we’ll just say, if you watch it, you’ll probably smile more than a few times.

Then again, in the end, what else do you want from a movie?