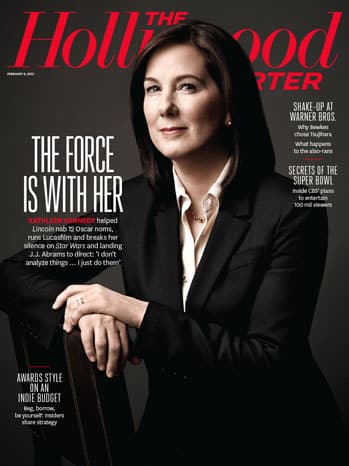 Here at fictionphile.com, I’ve been talking a lot about Star Wars. Well, this probably won’t stop, especially since I’m working on a few articles concerning how I’d like to see the new trilogy handled. There will be other topics discussed soon, but first I want to highlight a recent interview with Star Wars Producer Kathleen Kennedy from The Hollywood Reporter.

In this article, she shows why Star Wars is in good hands. Now, I don’t mean J.J. Abrams here, though I do think he’s a good choice. I mean Kennedy herself.

First, let me highlight a quote concerning the release date. At first, it was set as 2015, but that was pre-production and pre-Abrams. Many have whined about the possibility, but they’re wrong for a number of reasons. One of those reasons is exactly what Kennedy says here.

“Our goal is to move as quickly as we can, and we’ll see what happens. The timetable we care about is getting the story.”

THAT is the mindset all Hollywood producers and executives should have. It’s about the story. I’d be thrilled if Star Wars Episode 7 came out in 2020, as long as the movie was as good as it deserves to be.

One doesn’t have to look further than my last article here to see how less intelligent, executives think. And they’re destroying properties with their mindsets.

I don’t know what Star Wars Episode 7 will be like, but I feel assured by the entire THR article. Kennedy proves herself, and the article helps, as someone devoted to telling great stories. She’s also incredibly ferocious when it comes to getting the talent she wants. With that, and Disney’s bankroll and support, J.J. Abrams will have whatever resources he needs to complete the vision from the script, including time. It’s rare to see what can happen when creative people have that combination of money and time. I’m excited for the results, even if it means waiting longer.

It’s a shame you don’t have a donate button! I’d without a doubt donate to this fantastic blog! I suppose for now i’ll settle for bookmarking and adding your RSS feed to my Google account. I look forward to new updates and will share this blog with my …