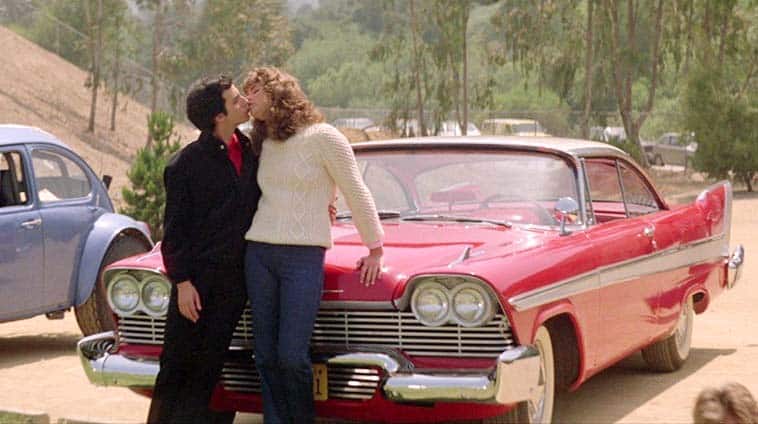 Arnie Cunningham (Keith Gordon) dreams of owning his own wheels, and by chance, they drive past an old house where an even older man keeps a classic car, a Plymouth Fury, in his yard.

There exists a moment every teenage boy dreams of: buying his first car. The cooler the car the better. That doesn’t come cheap. But for a young man who got picked on at school and never looked at by a girl, his moment to shine appears in the form of a vintage car.

Despite the old girl being rusted and run down almost beyond repair, Arnie ignores the advice of his good natured friend Dennis (John Stockwell) to think it over and instead forks out his life savings. Driving Christine away, all seems well.

But this is a Stephen King story. We in the 21st century, watching this movie from 1983, know that the macabre is not too far away.

After scrounging around for old parts at a local mechanics, it’s not long before the 1958 Plymouth Fury is fully restored to its former glory.

Its shiny red exterior catches the eyes of everyone. Christine the car (and Arnie) begin to draw the wrong type of attention.

Behind the wheel of this superb automobile, Arnie transforms from a weakling who trembles in the shadows of bullies to an overconfident and self righteous douche bag.

A Collision of Ideas

Christine is another fine example of how effective King can be in writing stories that combine two seemingly unrelated ideas.

In this case, it’s the classic tale of a boy buying his first car. One he hopes will make him cool and popular with the ladies. At first, it’s a success story.

But the kicker is that his car is haunted and goes after anyone who dares try to take her driver away from her.

Christine Is A Thrill Ride

If you thought the sight of a car chasing people down roads was a one note idea, just watch and see how a handful of thugs and jerks are stalked along streets, forced down alleyways, and trapped into corners they can’t escape from in clever and cruel ways.

Christine (1983) delivers all of this in fine fashion under the direction of John Carpenter.

John Carpenter clearly had some fun in the driver’s seat of this little thriller, continuing to cement his reputation as the King of Horror Films in the 1970s and 1980s.

Tragic Love… For A Car

If you were to look for a theme in Christine, is it a rendition of Beauty and the Beast or Romeo and Juliet? Either way, Christine is a tragic love story of sorts.

The movie is about a teenager’s love for his first car that turns into a love affair with a car. It captures that indescribable feeling of sitting behind the wheel of your first car, hitting the road, working on it day and night, and believing it’s the only thing that truly gets you.

But in the case of this film, what starts as an innocent bond between a boy and his car becomes an obsessive relationship between maniac and machine.

Was there a sequel to Christine?

No. Neither the movie or book ever got a sequel. However, Stephen King pulled a cruel April Fools joke once that a sequel would be published in 2015.

What is Christine possessed by?

Book and film disagree. Book: The evil spirit of former owner Roland D. LeBay. Movie: The car came off the assembly line with an evil soul.

What kind of car is Christine?

A red 1958 Plymouth Fury with a white top. In the movie, the production also used two other Plymouth models, Belvedere and Savoy, in some instances. 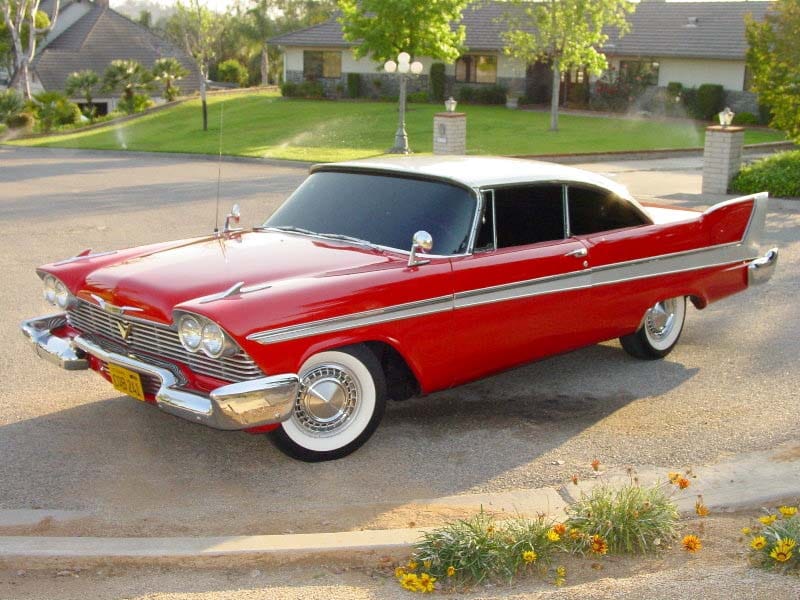 What is the movie Christine about?

In short, boy falls in love with a car, boy buys car, and instead of happily ever after, the car starts murdering people.

Now that you’ve driven Christine (1983) around the block a few times, it’s your turn to take the wheel.

Let’s pop the hood and discuss what Christine’s working with now that more than a few decades have passed. If you haven’t seen the movie or read the book, be sure to swing by Amazon for a copy at the following links.

Read the Book
Watch the Movie

What did you think of the Stephen King classic and its big screen adaptation?