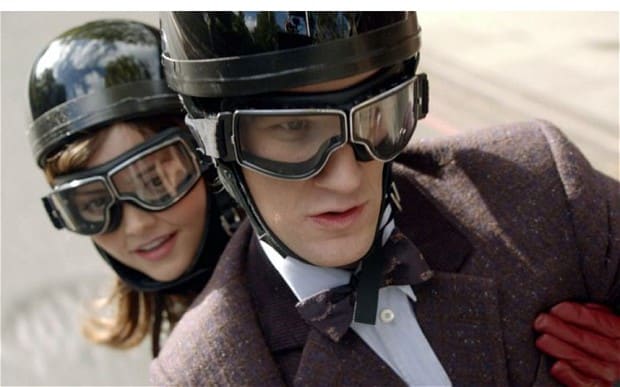 The Doctor’s companion Clara “Oswin” Oswald continues to baffle. And it’s clear to me now that this, the latest of many Doctor Who mysteries, won’t be quickly solved.

Sunday night’s return, “Bells of St. John,” started out intriguing and laughable at once. Because the way they reveal the doctor after an absence is always intriguing. But it was laughable because the Wi-Fi set-up seemed to be trying far too hard to be hip.

After the show eased into the storyline, it picked up. And we saw Clara (Jenna-Louise Coleman) show similar traits such as going by Oswin, saying “Run You Clever Boy,” and working as a governess. But the one trait we didn’t see repeated is the whole dying thing. I think they’re saving that for the beginning of the next episode, “The Rings of Akhaten,” but maybe that’s just me.

Regardless, there were a few clues about Clara in this episode. Or rather, clues about what she’s not.

One, the Doctor opens a book in her room where she’s written her age nearly every year of her life, from a single digit age. This means she’s not an impostor who somehow implants herself into others’ memories and lives, sort of like a reverse “Silence.” Or, if she is, she’s a very good one.

Also, her personality across different iterations may be up for debate. Now, there’s room to disagree, but the Clara in this episode didn’t come across as intelligent as the Clara in “The Snowmen” and “Asylum of the Daleks.” Not until after she was downloaded back into her body. Then, she suddenly was granted computer skills, but what’s more, she generally seemed to have a higher IQ.

Now, one could say her position in “Asylum of the Daleks” is perilously close to “Bells.” But even the Clara from “Snowmen” seemed smarter way back in Victorian London than Clara came across in modern day prior to being hacked by evil WiFi.

So, her exact personality or inherent traits aren’t (or weren’t if you believe she’ll stay alive this time) exactly fixed. There is some wiggle room. The Clara who became a Dalek and sacrificed herself, the Clara who got pulled to her death by ice turned sentient, and the Clara now mulling over the Doctor’s offer are not the same person.

There is intrigue here. I like this. It may be explained away in a one minute flourish of psuedo-science at the end of the season, or it may all be explained methodically and work like a puzzle.

Now, as for my personal vote on what I’d like to see happen in the next episode? Well, my personal desire for instant gratification would lean me toward wanting a fresh start with a long-term companion. A new Rose. A new Pond.

But the part of me who is the guy running fictionphile.com tells me that would be a boring episode and a boring season. Much more boring than if she were to die either at the beginning or end.

The Doctor, enraged over having victory torn from his grasp, vows to get serious about getting to the bottom of the mystery surrounding his companion Clara. Which may end in his death when “the question” is asked. I’m assuming it’s “Doctor Who?,” as they made a bit of a foreshadow nod to it in this episode.

[…]we came across a cool site that you might enjoy. Take a look if you want[…]……