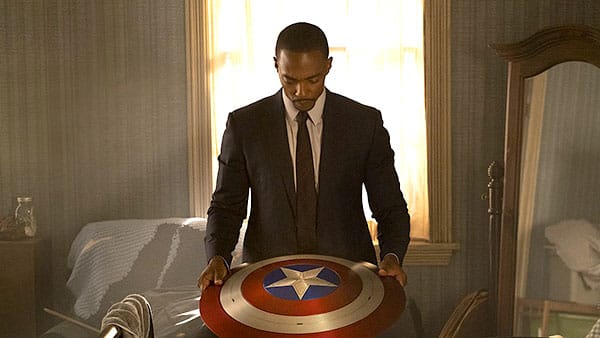 The Falcon and the Winter Soldier: Season One Review

The Falcon and the Winter Soldier: Season One is now out on Disney+ in its entirety. We thought we’d take a look back and review the newest Marvel TV outing for devoted viewers and potential binge watchers alike.

The Falcon and the Winter Soldier, or as we like to call it, How Falcon Got His Groove Back, is set just after the events of Avengers: Endgame.

The Falcon (Anthony Mackie) was just given the famed Captain America shield by an aged Steve Rogers in Avengers: Endgame. He wastes no time in turning it over to the U.S. government, who swiftly hands it to some white guy. Meanwhile, terrorists appear who liked it better when the world was half-snapped. Because there were finally enough resources to go around for underprivileged populations.

Now, for those who haven’t watched the show, this may seem like a strangely reductionist view of a story with a needless racial lens. Yet, The Falcon and the Winter Soldier: Season One is very much about race. We won’t spoil why and how, but the show deals with social issues more than any Marvel property ever has.

This season (the only season?) takes the story of Captain America’s squad of patriotic superheroes where it should logically go. Overall, we like the subject matter and the tone. The general plot direction is a good one.

But there is a lot of dead air, so to speak, in The Falcon and The Winter Soldier: Season One. It feels slow in the middle, just as the hunt for the bad guys heats up. No doubt due to the long runtime of this formerly movie-bound cast of characters.

The acting in the MCU, and so far in the Marvel television extension of the MCU, has always been solid and dependable. That’s what comes from having all the money of Disney behind you, we suppose. You can hire only proven, well vetted actors, instead of taking chances on SAG minimum talent.

That said, serviceable is about all you get. Outside of Sam Wilson and Bucky Barnes, the acting is, dare we say, fit for television. However, there are some exceptions in The Falcon and The Winter Soldier: Season One that come close.

Wyatt Russell‘s performance as John Walker, aka the new Captain America, aka U.S. Agent in the comics is great but not extraordinary. This is incredibly disappointing, seeing as how Wyatt Russell is extremely charismatic and likeable. Just watch his performance in Black Mirror. One has to wonder if casting him in a quasi-villainish role, especially that of a fairly straightforward jerk, was a mistake.

There’s a guest star who is perfect for Marvel, but we won’t give him or her away. Kudos to Marvel for bringing them aboard.

Baron Zemo is surprisingly likeable all the sudden. We give all the credit to Daniel Brühl. It’s actually a very welcome twist.

Other than that, the acting in The Falcon and The Winter Soldier: Season One fairly plain. Is this to be expected with a television show? Maybe. But not the MCU. That is a unique problem the superhero movie universe is facing now. We’re not sure they’ll entirely crack the code anytime soon.

The style and quality, although greatly scaled back for a smaller budget, are virtually indistinguishable from a tentpole movie. That said, The Falcon and The Winter Soldier: Season One runs into the same problem the Marvel machine sometimes runs afoul of–a ho hum, straightforward directorial style.

Conclusion: The Falcon and The Winter Soldier: Season One

The Falcon and The Winter Soldier: Season One is a decent appetizer to whatever happens next in the movies of the MCU. But it is most definitely not a main course. Consider watching it for a few standout moments, including story occurrences you’ll want to be aware of, but don’t expect to see something on the level of the theatrical version of these characters.