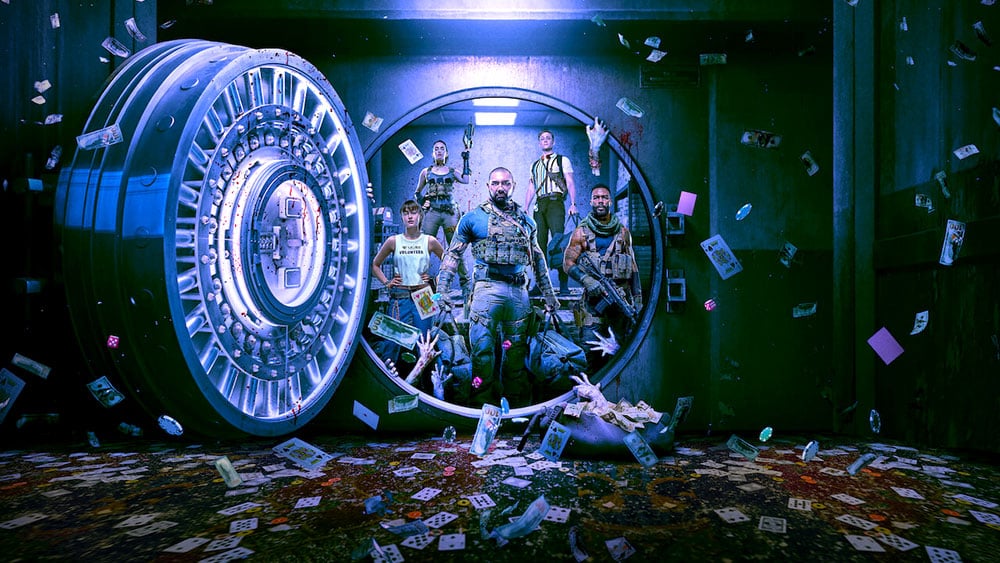 For Zack Snyder’s zombie-fest Army of the Dead, VFX is pretty important, to say the least.

There’s a destroyed, zombie-infested Las Vegas to worry about, an undead tiger, and a late-game actor replacement that had to look seamlessly planned all along. No small feat, but the team at Framestore was up for the task.

We had a chance to sit down with some of Framestore’s key players for this project and pick their brains on some of the crazier aspects of putting together this action-packed visual feast.

Army of the Dead stars Dave Bautista, Ella Purnell, Omari Hardwick, Ana de la Reguera, and Tig Notaro, who replaced Chris D’Elia after he got booted (having already filmed the entire movie) due to sexual assault allegations. You can find the zombie romp in theaters now, or if you prefer to stay home, Army of the Dead has been simultaneously released on Netflix.

Fictionphile: How did you digitally integrate Tig Notaro post-shoot?

Joao: Tig’s addition to the project came late while in final delivery of the project. With that, the filmmakers had a clear interest in making this work be done seamlessly thus there was a lot of pre-production planning to make sure all the pieces were set and she could be part of the movie.

First, Framestore provided tech-viz for the shots in which the actor would be replaced so production would have all the info needed regarding distance to the camera, focal lengths and camera moves/angles. Marcus Taormina (VFX Supervisor) oversaw the shoot and provided plates with matching lighting, props/set pieces for Tig to interact with and reference photography to be used in post.

Once in the post, the first step would be to match the camera movement on the 2 plates (principal photography material and re-shoots) and do a line up of the 2 characters in some key moments of the shot using our digital versions. That proved fundamental so we could have a solid reference and start the shot work with an accurate foundation. There was a lot of attention to detail while removing the actor from the principal photography and making sure that the background recreation captured all the look/elements from the photography replicating all the lens qualities seen in the surrounding elements. The paint out had to deal not only with removing the actor but also everything that was related to his performance (shadows, reflections and ground interaction).

With that work done, Tig green screen plates were added to the shot based on the line ups. That first pass with her plate provided a lot of information and served as a starting point only. Due to height differences, different performances, we would then creatively change her position to keep eye lines and make her sit into the plates.

At this stage we would review the shot and “feel” like she was in the scene. By this stage, we introduced additional elements such as having her shadows be distorted by the dirty ground, add footprints, getting her boots dirtier, adding more highlights into her costume and tweaking the light so the light direction matched perfectly to what her surroundings were.

Other elements such as dirt kick ups while walking or subtle dust blowing over the character embedded her into the shots. On top of that, replicating the Canon Dream Lens look with the complexity of it’s features such as shallow depth of field, complex bokeh shapes, vignetting, sharpening on specific areas of the lens added the final touch and created a consistent look.

For some shots, the approach was to fully replace her with a digital version of Tig. Reference photography as well as clips with her walking and performing specific actions (loading her backpack, moving around, carrying a weapon etc) were provided so we could have a direct target for our work. On our digital version, matching her likeness was key and reproducing the finer detail such organic/realistic hair movement, fabric folding on her uniform down to compressing her boots as she walks was essential to have the character integrated into the shots.

Fictionphile: How did the team build and destroy Las Vegas?

Bob: As much of the story takes place in destroyed Las Vegas, creating a digital version of that world was one of our most ambitious challenges on the project.  We spent two weeks in Las Vegas photographing and scanning the strip. This became the foundation for building our version of Las Vegas. The scale of the strip is massive. Each property covers a massive area.  We wanted the audience to feel that expanse, so we built our Las Vegas to scale with an accurate layout of all the structures along the strip. We only deviated from the real Las Vegas by adding the two fictional hotels, the Olympus and the Bly, which are unique to the AOTD world. Great care and artistry  was given in adding the destruction, debris and texture to create the final look of the Las Vegas you see in the film. This environment was immense. We were always pushing our hardware to the limit when rendering destroyed Las Vegas.

Fictionphile: How did the team create an undead tiger based on the one from Tiger King?

Bob: Our CG zombie tiger was initially based on a reference tiger named Sapphire who lived at the Big Cat Rescue in Florida. Sapphire was scanned, photographed and recorded for motion reference before Tiger King was released. We built the non-zombie version of the tiger first. This allowed us to have a physically accurate anatomy to start animation.  Once Zack approved the final Valentine concept art, we incorporated the zombie characteristics.   We began with peeling away the layers of skin and muscle to reveal internal anatomy like bone and tendons. Our animation and creature FX teams added skin sliding, fur dynamics and muscle giggle for realistic motion of her exposed anatomy.  Adding dry blood, dirt clumps and decayed anatomy was the final step to give Valentine the same patina as the rest of the world created for Army of the Dead.

Fictionphile: What kind of themes and/or vision from Zack Snyder went into consideration for the VFX?

Bob: Zack boards all of his shots, so we always had a clear vision of what he wanted the shot to be. For me, the title sequence is a perfect example of Zack’s style. It showcases his ability to maximize the action in a shot. If the framing of a shot isn’t particularly wide, he finds a way to add layers of action deeper into the frame.  It is impossible not to feel the chaos of the world he is establishing in the title sequence. We had a blast working on those shots.

Fictionphile: What lessons did you take away from other zombie films?

Bob: You have to destroy the brain! I love when Zeus pulls his armored mask over his face, you knew this was going to get ugly for the protagonists. From a VFX point of view, we knew there would be augmentation and cleanup of special creature effects. The CG elements we create are done to compliment their work.  The shots are truly a collaboration of all departments.

Fictionphile: What choices did you reject from other zombie films?

Bob: Zack did not hand us a rule book. Nothing was taboo or off limits.