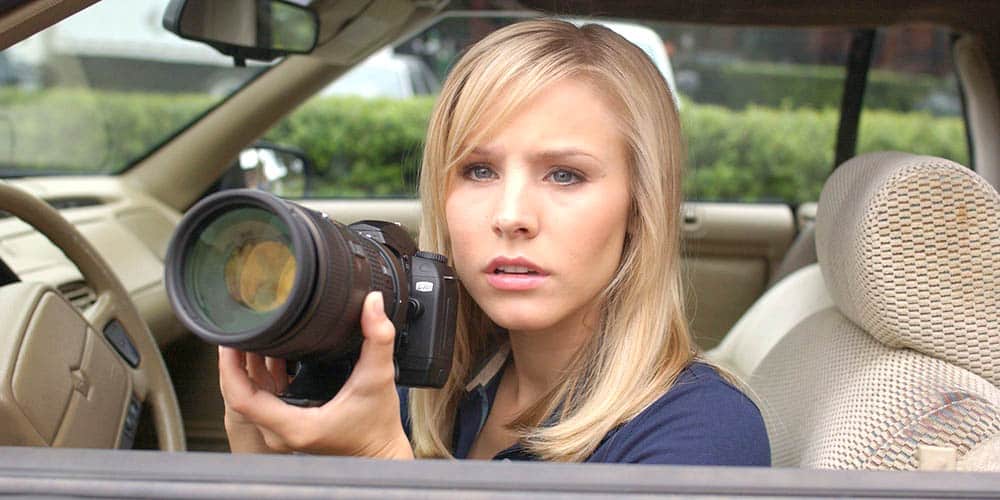 Girl power was on the move in 2020, but like most things, it was derailed by the Coronavirus pandemic sweeping the globe and driving many indoors, voluntarily or not.

It’s been a few weeks now since many of us have been told to shelter in place in order to flatten the curve of the Coronavirus’ spread. Even longer that many in the world have been told to distance themselves from others.

That’s a lot of free time with nothing to do.

Some of us are lucky enough to work from home, but with no commute and no social interaction it’s been rough, to put it mildly.

If you’re like us, you have a long queue of things to watch on your various streaming platforms, books waiting to be read, and a huge backlog of unplayed video games because there never was enough time.

Now that there is enough time, we have a new problem. Where do we start?

Well, why not embrace the road we were headed on before Hollywood grounded to a halt?

You just can’t ever go wrong with V. Mars.

Veronica Mars became a cult classic for a reason. Its got quippy dialogue, murder, and general mayhem. It even showcases the class struggles between the haves and have-nots of the fictional Neptune, California.

Rob Thomas (no, not the lead singer of Matchbox 20) wrote us a flawed heroine, the titular Veronica Mars, who you just can’t help to root for as she struggles to solve her best friend’s murder.

We relish the tension between Veronica Mars and Logan Echolls the popular rich kid who seems to have made it his mission in life to remind her of her place.

Then there’s the ex-boyfriend, the new kid/best friend, and the leader of the local biker gang. Not to mention the many other people who say, “Veronica, I need your help.”

The show even demonstrates that not everything is black and white.

All in all, Veronica Mars is a smart-as-hell show and definitely deserves a slot in your quarantine queue.

Even if you’re not stuck at home, Parks and Recreation is just one of those shows that has infinite rewatchability.

Parks and Recreation features an amazing ensemble cast of characters, a feel-good message at the end of the day, one of the best empowering female friendships on TV, and loads of heart.

Beyond that the writing is amazing. The development of the characters over the seasons really makes you feel like you’re growing along with them.

You just can’t not love Amy Poehler as Leslie Knope. She’s over the top and driven. Sure. But beyond that she’s caring and compassionate, and she truly believes in lifting others up.

Just look at the motley crew she works with in the Parks office. She never hesitates to help when asked, or even not asked… but it’s clearly needed.

Plus, it’s the show that brought us Treat Yo’ Self and Galentine’s Day, two of the best days of the year. So clearly, it’s time for a rewatch of Parks and Recreation.

As Donna says, “In matters of the heart, treat yo’ self.”

We can’t say enough good things about the telenovela-inspired Jane the Virgin.

We admit some of us missed the show when it was on television and just recently discovered and binged it. But we love it so much that we’re already raring to go again.

The center of the show revolves around Jane’s artificial insemination, and the romance triangle.

(We’re pretty evenly split between #TeamRafael, #TeamMichael and just plain old #TeamJane, by the way, for those keeping track)

But at its core Jane the Virgin is a show about family.

Bringing it back to girl power, Villanueva women have always been there for one another. Even through the crazy ups and downs of Jane’s father coming back in the picture, murders, weddings, and stolen sperm, the relationship between Jane, her mother Xiomara, and her grandmother Alba is unshakable.

And of course, we’ll take any excuse to watch Jaime Camil and his extraordinary performance as Rogelio de la Vega.

By this point, we think it’s pretty obvious that we’re a sucker for a well-written show.

Gilmore Girls is another of our favorites that has great watchability. It’s witty and wholesome.

It’s got universal themes as a show about a single mother and her daughter struggling through relationships, jobs, school, and life in a small town.

Plus, we can unashamedly say that this show has made many of us cry and then immediately start laughing so hard that we started crying again.

Stars Hollow is full of quirky and strong characters, from the central duo of the show, Lorelai and Rory, to the supporting cast members.

Gilmore Girls shows that no matter how hard someone tries, no one is perfect. The show revolves around the mother/daughter relationship, with Lorelai and Rory and with Lorelei and her mother, Emily.

It’s full of fun pop culture references, love triangles, romance, and comedy, but all of that is secondary to the relationships between Emily, Lorelai, and Rory as they struggle to relate and support each other.

Hands down, Buffy the Vampire Slayer has got to be one of our favorite shows to binge (and re-binge).

Despite the campiness of the 90s that lingers in the first couple of seasons, Buffy the Vampire Slayer holds up really well.

It’s a character driven show. The plot is mostly used as a vehicle to delve into the different personalities of the cast of characters. Buffy the Vampire Slayer never passes up a chance to show us the very human strengths and weaknesses the Scooby Gang have in this supernatural world.

They’re flawed and do some really dumb stuff sometimes, but you always find yourself rooting for them in the end.

Buffy the Vampire Slayer alternates between some of Joss Whedon’s best dialogue writing and amazing comedic timing by the cast. Then, the show does a complete 180 and just punches you in the gut with certain episodes (we’re looking at you The Body).

This is a show about life, often using the monster of the week as a metaphor for normal problems. We see Buffy, this girl that just happened to be chosen as a vampire slayer, and we watch her survive and come really close to thriving.

But it’s the dynamics between all of Buffy the Vampire Slayer’s characters that I think really make the show stand out.

And of course, Once More with Feeling is always a good episode to rewatch to get your Buffy fix.

Hopefully you’ve enjoyed this list of girl power TV shows and will put them in your quarantine queue.

You can even pretend you’re watching them with us crashing at your pad if you’re in need of some–albeit imaginary–human contact (God knows we are).

Along those lines of human interaction… leave us a comment down below! Any recommendations for shows featuring kick ass heroines?