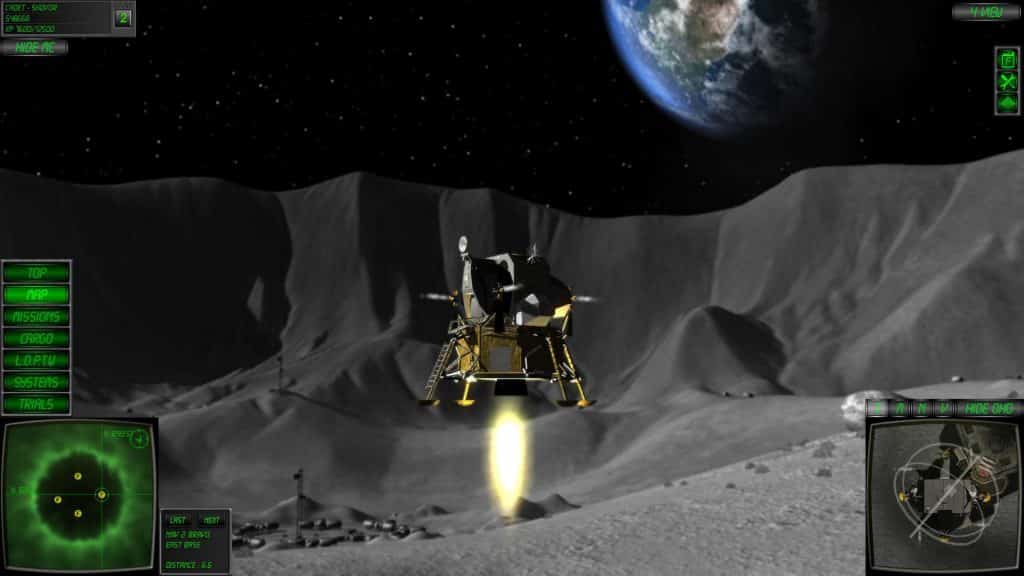 Lunar Lander: The Full Story of the Legendary Game and Genre

Lunar Lander started as a small project by a high school kid but has become a genre unto itself. This gaming story is 40 years in the making.

The 1960s were a turbulent time. We are reminded of this every time we watch a documentary about the decade that gave us hippies, the pill, psychedelic music, and footprints on the moon. The decade was full of fascinating science, especially in the areas of space sciences and computing.

NASA was gunning to fulfill the promise of President John F. Kennedy to put a man on the moon by 1970. It was a bold statement. One that some think he had no intention of seeing happen, only using it as a rallying point.

His murder led to the charge being taken seriously, and we poured billions of dollars into space research to make it happen.

And it required computers.

Computers in the 1950s had been massive affairs: vacuum tubes and memories formed of coiled wires or tanks of mercury or cathode ray tubes. They were still the fastest machines that had ever been constructed.

Some estimated to have done more pure mathematical calculations than all of humanity had managed up to that point.

By the 1960s, the introduction of the transistor and core memory had led to an incredible increase in performance, a drop in cost, and a wide new set of applications being possible.

Mainframes from companies such as IBM, Burroughs, and Control Data Corporation were able to create complex models that had never been possible. This led to the advances in the material and physical sciences required to put humans into space.

These technologies were quickly applied, tested, and put into use by the Space Program. Every news outlet covered the event, and they filled television screens with images of rocket tests, interviews with astronauts, and coverage of NASA’s daily advances NASA.

Pop culture latched on to this with a vengeance.

Science Fiction had been on the rise since the dawn of the Atomic Age. Although the 1950s were all about wild visions of the future, the 1960s began to show an interest in harder science, more accuracy, and stories based on a thorough understanding of the current state of space science.

To see the difference, all you have to do is compare Forbidden Planet to 2001: A Space Odyssey.

The Gaming Race Heats Up

As has always been the case with computers, off-duty operators and programmers created games for mainframe computers. Games like baseball and tic-tac-toe existed in computer form, but the space game was already getting notice with SpaceWar! being popular on college campuses.

The availability of minicomputers meant another demographic gained access to computers–high school students. It was not unusual for a high school student, when given the chance, to create impressive games for a computer. That started very early.

Lexington High School held a great advantage over many others; it was located in a city where a great many employees of Digital Equipment Corporation lived. This helped Lexington acquire a PDP-8 minicomputer, which students were allowed to program.

One Small Game, One Giant Leap for Gaming

Jim Storer, a Lexington student, programmed a game machine in 1969, shortly after Neil Armstrong and Edwin Eugene “Buzz” Aldrin had walked on the face of the moon.

Storer called the game Lunar, and it was a simulation of controlling a landing module onto the moon’s surface.

The limitations of the PDP-8 meant that it looked nothing like you might expect a game about landing a craft onto the lunar surface might look.

First off, there were no graphics. The PDP-8 could use a display, but they were very expensive and most installations outside of government agencies or well-funded research groups didn’t have them. Instead, a user would interact with the machine through a Teletype, a console typewriter that acted as both an input and output site.

The user would type in commands, and the computer would print out the response. To play Lunar, the player would be shown factors such as the condition of the lander, altitude, velocity, position, and amount of fuel. The game treated each move as a second in the critical period of the module’s landing. The game required the player to enter commands to straighten, slow, and maneuver the lander into making a safe descent to the surface.

In that way, it was very much like the methods of landing that the actual astronauts had to use to land the LEM (Lunar Excursion Module).

The player had to be able to either visualize the landing, or simply understand the parameters being displayed. It was a notoriously difficult game, and if there’s one thing that gamers love, it’s a challenging game… even if many considered it unwinnable.

Today, if you’re a kid who has created a game and try to send it into a major corporation, you’ll either be dutifully ignored or greeted by lawyers on your doorstep.

In the 1960s, with software not yet being commodified, the spirit of sharing ruled computing. A kid could send a paper tape of a program to a company like Digital Equipment Corporation (DEC). They’d not only acknowledge it but might even distribute it through its major newsletter.

One of the major ways software was distributed was through printed source code, and that’s exactly how Lunar was sent around to every DEC user through the DEC user society (DECUS). The users would then enter the source code, typing it by hand into the machine through a Teletype. This was slow, and a single error could make the program completely unusable.

Luckily, a Teletype gave you the option to output the program to a paper tape. This allowed for the game to be shared.

A Lunar Landing for All “Languages”

Storer had created Lunar using the FOCAL programming language. This wasn’t the ideal language, because it wasn’t a widely-used language. Although, it was incredibly efficient, allowing it to be used with the bare-bones versions of DEC machines that you might find in a high school.

FOCAL was not overly popular outside of DEC users. Among other low-power users, such as students, BASIC (Beginners All-purpose Symbolic Instruction Code)was the most widely-used language.

DEC employee Eric Peters wrote a version for BASIC that he called Rocket. The game Rocket was the first version of Lunar to feature any sort of graphical element.

It displayed a simplified image of the terrain the lander hurtled toward made up of ASCII (American Standard Code for Information Interchange) characters.

It allowed the player to view the action and was usable without a graphics display.

Another version of Lunar, called LEM, was written in BASIC at roughly the same time.

In 1973, Digital Equipment Corporation released a high-end graphics terminal for their PDP-10 and PDP-11 systems. The GT40 terminal used a cathode ray tube display with a keyboard and a light pen to interact with the screen. As is always the case, when a shiny new technology appears, they needed a way to demonstrate the device to non-technical people.

A game is the most frequent method of doing that, so DEC engineer Jack Burness developed a version of Lunar, called Moonlander.

It used actual graphics, albeit just green lines on a black screen.

This version of the game proved to be the most influential, introducing a variable terrain concept, and actually ran in real-time, requiring a player to continually adjust and interact with the screen using the light pen.

Interestingly, Burness claims to have never played the original Lunar and actually used data from Massachusetts Institute of Technology to determine the equations for fuel consumption and velocity.

This version was brought around to trade shows as a way of enticing groups to purchase the GT40.

Lunar in the Growing Age of Games

Throughout the early 1970s, as the cost of computers and peripherals dropped with the introduction of the microprocessor and increased miniaturization, games became a focus for software.

David Ahl, editor of the DEC newsletter that had published the Lunar code, wrote a book in 1973 called 101 BASIC Games. In it, he included Lunar under the name Rocket, as well as the other versions that had been written by DEC employees.

Ahl sold more than 10,000 copies of the book full of these games, making them some of the most widely-distributed computer games up to that point in history.

Thus far, players enjoyed all of these games on minicomputers and mainframes. However, as the microprocessor and other miniaturization techniques became more prevalent, various forms of Lunar begin to pop up on new platforms.

Programmable calculators, like the HP-25, had a version of Lunar Lander, as did the MK14 personal computer in the UK. These were the first versions that began to reach an audience beyond technicians and programmers. This led to wider interest in the program.

The game finally gained its most famous title, Lunar Lander, when it was finally released for arcades.

Atari, the leading name at the time in both home and arcade gaming, released Lunar Lander in 1979. The game was noted for impressive vector graphics and was clearly inspired by Moonlander.

One of the best-loved advances to the game was the multi-view.

When a player came close to the ground, an in-set close-up image of the lander would appear, allowing for a more detailed landing interaction.

A player could even purchase more fuel for their ship by putting another quarter in the machine.

As was the way of the industry at the time, other companies released their own versions of the popular game.

IBM, the world’s largest computer company at the time, and far more synonymous with business software than games, released Rocket Lander for the IBM PC in 1982.

Lunar Lander was written for the TRS-80 microcomputer, noted for it’s clean and clear graphics.

While the late 1980s saw few versions released, in 1990, the Nintendo Game Boy in Japan had Lunar Lander, a very impressive black and white version of the game.

While most of these were simply adaptations of the DEC game Moonlander, Tom Hudson’s Retrofire added much to the gameplay, including multiple control dimensions and a 3D view of the scene.

While commoditized versions of Lunar Lander were the norm, many homebrew versions still existed, especially those based on the versions included in Ahl’s books.

The availability of simple-to-follow instructions on how to create a complete game made Lunar Lander one of the most widely played games of the 1970s and 1980s for personal computers.

As is always the case, the increase in computing power along with the decrease in cost led to great improvement of graphics and interaction. For instance, the 1999 version Lander by Psygnosis was easily the most impressive graphically up to that point.

The Android Open Source Project for Android used a neat version called Lunar Lander as one of the demo games for the project. Lunar Lander is also popular for emulation projects such as MAME, DOSBox, SIMH, and Nonpareil.

The clarity of the interaction, not to mention that space has always been a popular setting for games, makes Lunar Lander eternally popular.

Several former astronauts who have actually been to space, including David Scott, who guided an Apollo mission to the lunar surface, have played Lunar Lander.

Some have noted that it was so much easier than actually guiding the lander to the surface, naturally, but also noted that the tension they experienced playing it was actually comparable. They felt as if crashing would be like failing the brave astronauts in the module.

An incredibly impressive impact made by a game designed by a high school kid fifty years ago.