When reading a scary story, such as Stephen King’s Gerald’s Game, it’s our own perceptions of fear that visualize the words on the page.

No movie, including a Stephen King movie, can replace the vividness of our own imagination.

That said, even though the most talented horror filmmakers can’t scare everyone (especially this hardened horror movie buff), in the case of director Mike Flanagan‘s Netflix movie adaptation of Stephen King’s Gerald’s Game book… I was kind of scared.

Married couple Jessie (Carla Gugino) and Gerald (Bruce Greenwood) drive out to a remote lake house in the woods.

There’s not another car, person, or house around for miles. Only a hungry stray dog. They plan to enjoy a romantic weekend away.

The quiet and pensive Jessie is challenged by her outspoken and domineering husband, Gerald.

As the couple retreats into the lake house’s bedroom, Gerald’s true intentions for their relationship reveals itself.

Gerald handcuffs Jessie to the bed in a seemingly kinky flight of fancy.

But “Gerald’s game” makes Jessie uncomfortable and she asks Gerald to stop. As an argument ensues with Jessie still handcuffed to the bed, Gerald grabs his arm, then his chest, and has a heart attack.

Gerald falls into a slump on top of his wife. Jessie moves him off in an attempt to wake him up. But Gerald’s stiff body slides off the bed and hits the tiled floor with a loud thud.

Blood seeps out from Gerald’s head, and there is no more movement.

Here comes the central crux of Stephen King’s Gerald’s Game, as well as the reason why many considered a movie adaptation impossible to film for so long. Jessie isn’t going anywhere anytime soon.

Hours pass and Jessie thinks over her options. She can’t reach Gerald’s phone, so she can’t call for help, and no one is likely to show up at the remote lake house.

Handcuffed to the bed, it’s not long before Jessie starts to hallucinate, seeing her husband seemingly get up, walk around the room and talk to her.

At one point, in a very Stephen King twist that furthers the psychological thriller vibe, even a double of herself materializes in order to taunt her.

A Family Intervention from Hell

What follows is a three-“person” conversation, between Jessie, Gerald, and this manifestation of herself. This is the dramatic element of Mike Flanagan’s Netflix movie adaptation, which makes Gerald’s Game (2017) both intriguing and suspenseful.

This ongoing conversation reveals secrets from Jessie’s past, including those involving her father, as the movie unfolds.

Although Gerald and the doppelganger Jessie force her to confront the traumas of her childhood, it’s in those locked away memories where the secret to Jessie’s survival hides.

He writes about individuals in way over their heads against a force of evil or moment of impending doom. And they must figure the way out.

And in the case of the Netflix movie Gerald’s Game (2017), the spooky parts of Stephen King’s story are a fine example of how the author possesses a great imagination for dreaming up characters who resemble some of our worst nightmares.

One such character (Moonlight Man played by Carel Struycken of Twin Peaks fame) appears to Jessie at night, standing in the dark shadows of the room, as she watches from her vulnerable position handcuffed on the bed.

It’s a terrifying sight with an equally disturbing explanation.

For a movie about a woman handcuffed to a bed, there is only so much to be explored through cinematic action.

However, it’s the emotional and mental journey Jessie goes on that is the Netflix movie’s real strength. This is demonstrated and brought to life especially well by the Gerald’s Game cast.

The character of Jessie is brilliantly acted by Carla Gugino, and she’s equally matched by the always reliable Bruce Greenwood as her deceiving husband. 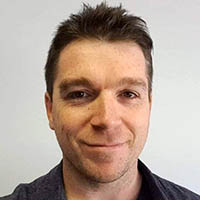 Brian McAleer
An Aussie guy who loves the movies of Hollywood; past, present and future releases. Loves to get talking about films, and he'll give you reviews that are fresh and a little different.