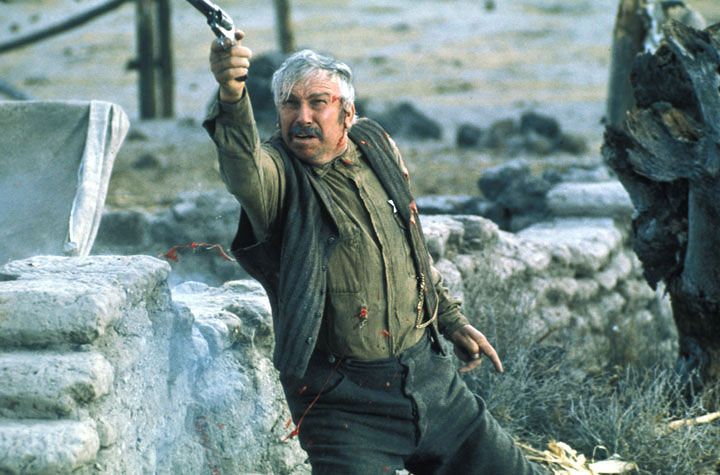 Pat Garrett and Billy the Kid: Lord Take This Badge Off of Me (Analysis)

Bob Dylan provides a little back-up music (and acting) and, with that and a little more help, director Sam Peckinpah gives us the penultimate scene in Pat Garrett and Billy the Kid.

Dylan’s Knocking on Heaven’s Door plays hauntingly in the background; Dylan himself wanders around other parts of the movie.

Lord take this badge off of me.

I don’t know if other people have an “iconic-psychiatrically-trenchant-set-of-film-scenes” stuck in their heads.

If you don’t: Good for you!

(Therapist, guru, or pharmacologist: Lemme know how you’ve managed to facilitate this.)

I’m not as lucky.

There are echoes and reverberations for me.

This is one of them.

And while I am drawn to mayhem — for reasons I won’t go into here — I am particularly interested in representations of violence — and of love — that are . . . something approaching genuine.

You don’t go into an extended, knock-down-drag-out — trading-roundhouse-blows-and-uppercuts — fight and end up sporting a tiny Band-Aid in the next scene, ready-to-go-again a quick minute later.

It’s a little more complicated and messy than that.

You don’t go into a relationship — if you pause to think about it at all — with the idea that, even if everything works out . . . Ever After, you’ll get out “clean.”

And — naturally — the physical wounds are the least of it.

Pat Garrett and Billy the Kid: The Story Thus Far

Over the course of the movie, Garrett (Coburn, snake cold) hunts down Billy-the-Kid (Kristofferson, oily loose), and, in this — literal — showdown, comes in with a posse that’s …

Is superannuated too obscure a term?

They’re “good and beat up by life,” I’ll settle on that.

Garrett first calls on Sheriff Baker (Pickens) and his wife/woman-friend/caretaker (Jurado) and entreats/bullies/pleads for their help.

But not in anticipation of glory or success.

You’ve chosen a certain life — or that life has chosen you — and . . . there really isn’t any saying oops-n’mind at what might-prolly-be the end.

You took that fork some time back.

Which nobody plans for but most people have anyway.

Slim and Katy eat that.

Because they are honorable people.

Love Amid a Gunfight

Bad things happen, which you saw coming a mile away. Sheriff Baker, a hand pressed to his fatally-bleeding abdomen, staggering, dazed and confused, toward a little splash of river in a dry landscape, as his woman — sobbing in wordless grief and rage — drops a beautiful shotgun and runs toward him.

Unsaid, but flashing through her tears?

I understand that when I describe Jurado as “a dumpy, ugly, little-old-woman, in a ridiculous Annie Oakley circus costume” (lanyard tight under her chin, holding on her tiny-flat, cowgirl hat) this might not, at first blush, sound like respect — or, even less probably, reverence.

But her entry point to the shootout, when she kicks down the tailgate of a buckboard wagon on which she has been lying in wait, firing that double-barreled shotgun — gotta be a twenty-gauge, maybe even a ten, which, believe me, is hard to hold steady — I am entirely serious when I say:

Start with the irony of the fact that Slim is paunchy and go from there: to the famously hoarse voice, the grizzled muzzle, the uncertain gait, the jowly, slightly dazed, face; he ain’t no prize either.

But they love each other.

Almost to the point of incomprehensibility.

In the end, why does anybody love anybody?

Because nobody ends up pretty.

He goes: because he has to go.

Let’s keep in mind, as well, that the alternative for them is not Tuesdays with Morrie.

They would not otherwise be spending their golden years skipping barefoot together through fields of daisies.

Much more likely: she would be swabbing drool from his chin — if things worked out well — or excrement from his flanks if they worked out . . . in more statistically typical fashion.

A little sad and creepy.

The abstractions are easy.

And not just for gunfighters and their partners.

For all of us.

Watch Pat Garrett and Billy the Kid on Amazon now