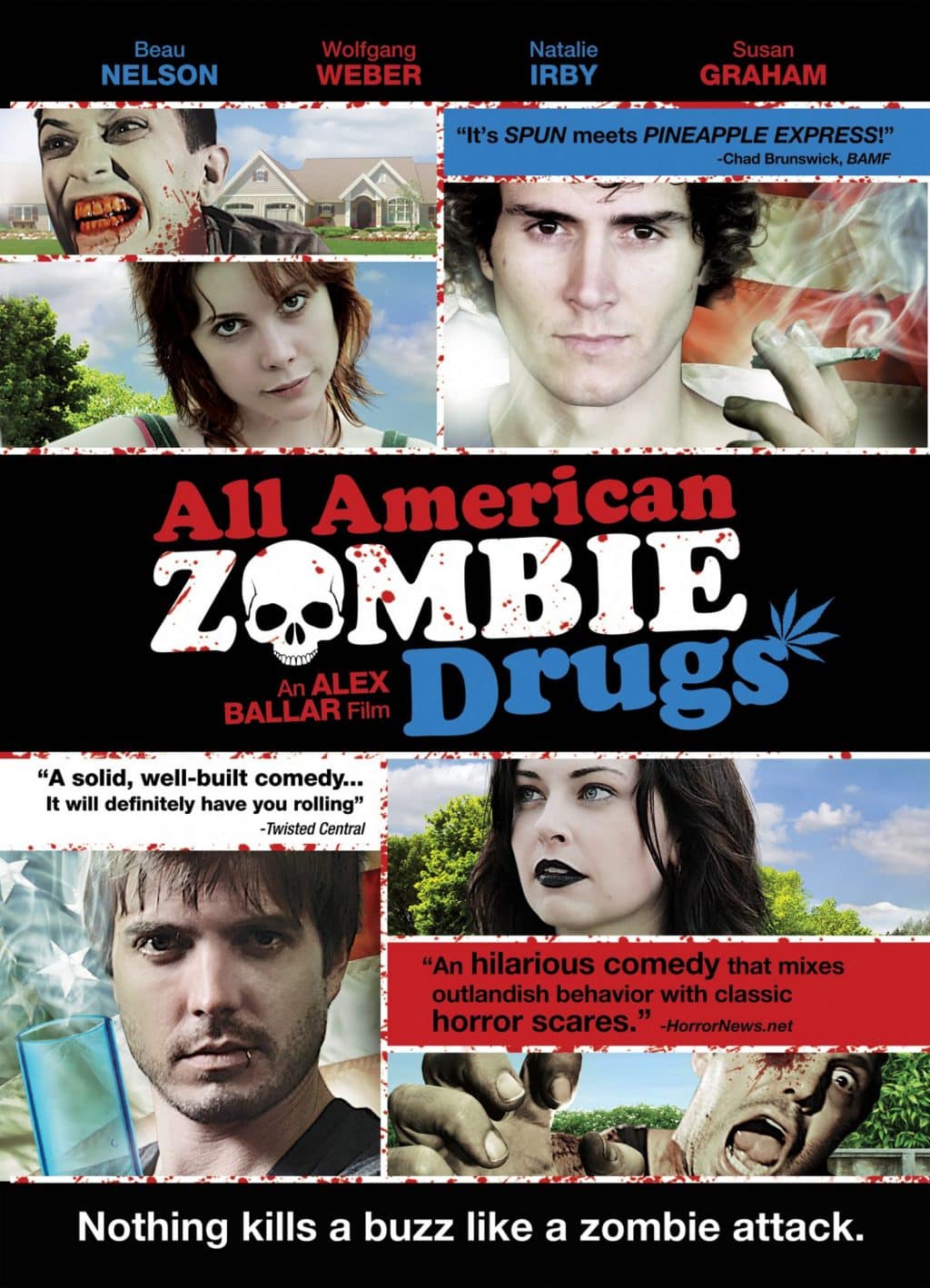 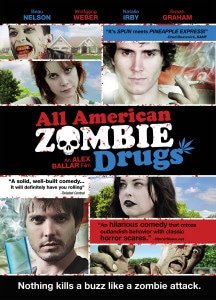 You have to commend All American Zombie Drugs for its ambition.

All American Zombie Drugs, which comes out today (June 23) on DVD and VOD, starts with a clever premise that sounds like a perfect marriage of two newly reborn and popularized genres: buddy stoner comedies and zombie flicks. Throw in some commentary about America’s youth’s fascination with getting high. Maybe go a little too far, like Requiem for a Dream, and force us to face the seedy underside of addiction. Embrace the dark like a Cable Guy or Death to Smoochy. While you’re at it, let’s do some slapstick. Oh, and don’t forget the romance!

It’s hard to squeeze all of that in a runtime of 100 minutes. At times, it’s hard to discern exactly what film All American Zombie Drugs wants to be. Really, my advice to the viewer is to throw out the conception that this is a zombie movie. It’s not Shaun of the Dead. Think metaphorically.

Once you stop waiting for the zombies and outrageous hi-jinks, you start to pay attention to the things the movie does have going for it. It’s a movie about a couple of burnout friends who decide to sell drugs. It’s not attention grabbing as a premise, but as a low-budget film there is emotional depth to be mined, though the movie does get too caught up in laugh-grabbing raunchy diversions. The genuine laughs in All American Zombie Drugs come from dark, dry humor, but far too much of the movie tries to appeal to the slapstick crowd.

Natalie Irby, playing the rich “goth” Melissa, turns in a nuanced, natural, yet magnetic performance. She manages to outshine the zany caricatures surrounding around her. Although it’s not until around the 30-minute mark that she arrives, she quickly becomes the one to watch. One of the smartest and biggest laughs for me of the movie came from her casual assurance to Vinny (Wolfgang Weber) that the grounded-into-powder prescription meds she offered for him to snort were not “generic.”

Irby was quite a find for All American Zombie Drugs, but thankfully she’s entirely alone.

Brian Smith, who you may recognize from appearances on The Big Bang Theory, among other stops for a comedic actor trying to break through, brings a dynamic energy to the few scenes in which he appears. Playing a higher up drug tough, he adds much needed tension in the way of a talented straight man.

You can see how the more physical comedians, namely Beau Nelson (Sabastian), in the cast attune to the energies of Irby and Smith. They reel back just enough to make the movie’s unstable tone congeal. In fact, I found myself appreciating Nelson for the first time in his first one-on-one scene with Smith. Something just clicked, maybe because he now had a wall to bounce off of.

Which brings us to the film’s “buddies.” Nelson plays the “red nose” (to borrow from Eric Idle) tasked with the laughs, and Wolfgang Weber plays the straight man tasked with holding up the emotional core. To me, their chemistry did not work. It may be in part due to our initial impression of the two, which seemed more aimed at getting laughs for Nelson than setting up Weber’s character. And as a straight man, Weber does not provide much for Nelson, who is a mega-ton bomb of energy that fully commits to every scene. Again, to compare this to another dark comedy, The Cable Guy, Nelson needed a Matthew Broderick in order to anchor the scenes.

If you like and support true independent movies and are looking for a satire of drug experimentation, you will enjoy All American Zombie Drugs. Unlike some super indie films like this, the production level is surprisingly high. The story has more than a couple of bright spots, but you will likely wish the film had picked a lane and stuck with it.

Enjoy the trailer below, and let us know what you thought of the movie in the comment section underneath.