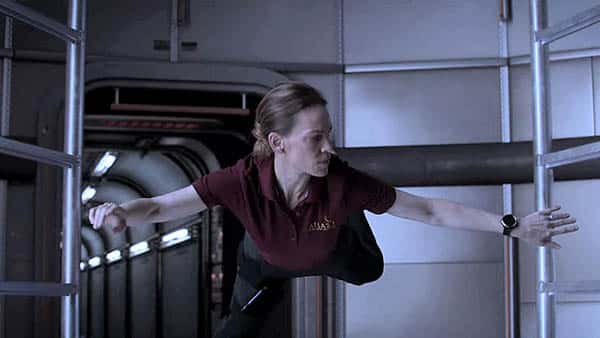 The Netflix series Away takes place in outer space, and VFX can make or break that illusion. Enter the Away VFX artists from Framestore.

The TV series, starring Hilary Swank, features the first human-crewed space flight to Mars. Although some science fiction uses inventions and spaceship designs to explain away Earth-like gravity for an entire story, Away embraces Zero Gravity with several weightless scenes and shots.

Framestore, a noted VFX shop with offices worldwide, took the reins for Away’s VFX duties. One might know the VFX outfit best for its past work on Avengers: Endgame and Disney‘s live action Mulan.

We were lucky to steal some time away (pun intended) from two Away VFX artists from Framestore: John Kilshaw, Creative Director and VFX Supervisor, and Andy Zazzera, CG Supervisor, Episodic. They dove into the technical challenges behind recreating a space-like environment, as well as how important it was to be involved so intimately with the production crew.

Fictionphile: Tell us a little about yourself and your path to your current position?

John Kilshaw: My first career was in finance before returning to college to study VFX at Bournemouth University. Upon graduation, I began my career in London working on feature film franchises like Harry Potter, The Dark Knight, Transformers, Avengers, and Pirates of the Caribbean, to name a few. I then moved to New York to become more actively involved in episodic — one of today’s most exciting and challenging projects in terms of bringing the creativity and quality of big budget feature films to television.

Fictionphile: What’s one Away FX that was especially hard to pull off, whether because of technical demands or artistic hurdles?

John Kilshaw: Creating fire and liquid that exists in a Zero Gravity environment was a challenge as gravity plays a large part in all forms of simulation.

Fictionphile: With the kind of photoreal approach taken with Away VFX, how does the balancing act work between cool looking and realistic looking?

John Kilshaw: We referenced multiple photographs from the Apollo space missions in order to make our treatment of the 3D and 2D as authentic as possible.

Fictionphile: I read about how closely Framestore’s Away FX team worked with the production crew, can you talk a little bit about that collaboration?

John Kilshaw: The production team allowed and even encouraged us to bring our full VFX experience to the fore, allowing us to make suggestions on the creative and technical approach which paved the way for a true partnership that worked to achieve the best possible results in the time allowed.

Fictionphile: How many in-the-chair hours did the Away VFX take in total for the team?

Fictionphile: Tell us a little about yourself and your path to your current position?

Andy Zazzera: I spent my first few years out of school in episodic television working on really fun projects for Sesame Street. After that, I spent the next decade jumping around as CG Supervisor at a handful of smaller studios. While my work was primarily in advertising, I received plenty of opportunities that ran the gamut across commercials, title sequences, AR/VR/Immersive, museums/galleries — you name it. I decided last year to make the jump back into episodic as I believe it’s the most exciting sector of the VFX industry at the moment. The challenge to creatively problem-solve ways to bring big feature quality to TV-scale projects is something that I truly enjoy.

Fictionphile: What was your biggest challenge for this project?

Andy Zazzera: Zero gravity effects are surprisingly deep problems to solve. For most events that might require VFX, we as an audience instinctively have some understanding of what they might look like in reality. Zero-G completely defies those instincts. I think most people would be surprised to learn that in real life, liquids and fire in Zero-G form perfect spheres. It just seems so wrong! If we were to stay faithful to real-life physics it would actually feel distractingly fake. So we had to develop a new kind of visual language for our FX to ensure that they looked great, looked believable, and that they did the job they needed to do, which is of course to tell the story.

Fictionphile: What Away VFX that you worked on are you especially proud of?

Andy Zazzera: I’d have to say the very last sequence we did, which is the big finale of the entire season. No spoilers, but it’s an incredibly emotional series of scenes, and seeing it all come together in the final product was really quite powerful. I’m proud that we were able to be part of such moving storytelling.

Fictionphile: If you were given input on a second season, what sort of relevant VFX or VFX scenario would you most like to tackle?

Andy Zazzera: Honestly, the fun part is coming up with super cool stuff that’s new and beautiful and challenging. It almost doesn’t matter to me what the specific FX scenario is. The problem solving required to tell a story in a beautiful way while meeting the challenges of TV scale production is a blast. Away had plenty of opportunities for that, so I trust that anything a second season had in store for us would be equally enjoyable to bring to fruition.

Fictionphile: In your opinion, when it comes to TV as an art form, how does FX complement that goal?

Andy Zazzera: Traditionally, television has had the reputation of being “lesser” than film, which I always felt was grossly unfair. Which is more present in our lives, TV or film? And I believe that episodic is a better format for telling stories on a grander scope. There’s only so much one can do with two hours, and TV doesn’t have that limit. Now that the handcuffs have come off episodic storytelling and that film quality is now available to stories of an episodic scale, I’m really quite excited to see what showrunners will do with it.

Away: Where to Watch

Away’s first season is available now to stream on Netflix.

As of yet, it has not been renewed for a second season, but stay tuned for more info.