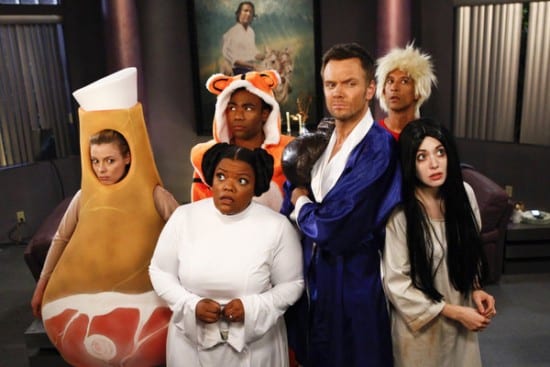 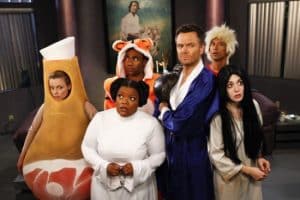 It’s obvious to say that NBC’s Community without Dan Harmon is different, but is it worse? Yes. A thousand times worse.

First, go read this story about the whole Harmon getting booted thing and his thoughts on future involvement (see: none).

Dan Harmon IS and WAS Community. The show ended when he left. Community without Dan Harmony is… well, just another sitcom, based on the two episodes we have seen thus far from season 4.

It’s not very funny. Let’s get one thing straight, Dan Harmon pretty much wrote every bit of Community himself. Listen to some of The Nerdist Writers Panel podcasts he and crew appeared on for evidence of this, where it’s pretty much said outright. He even says it in his statement quoted on Screenrant, in a “don’t sue me” way. You can tell now that he’s gone. The dialogue is painfully slow in comparison, and punch lines can be predicted five lines ahead.

It’s no longer nuanced. Characters seem to talk more like a fan-fiction writer would write the dialogue, not like living and breathing people that Harmon channeled. Sure, the characters have always been archetypes in a way, but they also defied those archetypes every single episode. Also, the plot and themes for the episodes always rose above comedy. At times, it seemed like a surreal drama, with some humor thrown in. It was a good television show even when it didn’t make you laugh.

One of the biggest parts of the show was parody, but the parodies were so obscure and subtle. Inspector Spacetime is obviously Doctor Who, but did how many of you actually knew about My Dinner with Andre until they parodied it? It was like an art house filmmaker was writing this show, but masking it all in a screwball comedy.

So now they have the guys who ran Just Shoot Me!. Really? Well, it sure feels like it.

Oooooh, the Dean moves next door to Jeff. I see neighbor hijinks ensuing! Troy doesn’t know about sex? What wacky awkwardness for his new relationship! Jeff’s dad is back in the picture? Will he or won’t he call him? I can hardly contain my anticipation…

They did do something clever in the first episode of this season. They made the episode a commentary on what was sure to be fan reaction. Abed feared the crew graduating, but it was really about fearing change. See, viewers, you’re being silly to not like this show just because it’s different. Embrace change! Otherwise you’re a kid with Aspergers Syndrome living in the past. That’s a pretty standard way of cutting down retorts during your opening salvo of a debate. You predict your opponent’s stance, and then you make it a point of ridicule, thus daring them to go on and use that platform. Heck, they even showed fantasies of the show being turned into the multi-camera sitcoms the new showrunners are popular for, thus stealing the thunder from critics.

Well, the only problem is the show isn’t worse now just because it’s different. It’s worse because the writing is just plain bad. The
“change” is they booted the creator, writer, and mastermind. Community without Dan Harmon is… well, Just Shoot Me!.

I sincerely hope this is the last season for Community. It’s a good thing they’re wanting to give the show closure, for fans. It’s sort of like going ahead and paying the hooker so that she leaves the hotel room already. But I’m sure when the box set comes out most folks will just stop at the real finale — the last episode of season 3.

I haven’t watched the second episode yet (kind of dreading it, even though I heard it was better than the first) but the best way I can describe my reaction to it was like if The Simpsons went straight from Season 5 to Season 10. Everything felt tired, immediately. Favorite characters were instantly grating. Everything played too broad. I liked the idea of the meta-sitcom stuff but in execution it just felt wrong. Way wrong.

It’s really heartbreaking for so many reasons. The fans and everyone involved in the show fought so hard for another season. And for their sins, they were given one. I don’t blame the writers or the cast. Dad died, but the kids are trying to run his restaurant anyway. It’s really the suit’s that mucked this one up. They weren’t happy with the ratings, so they created a show that nobody’s going to like. I think most or all of the original writing staff quit after they finished filming.

A lot of the specific plot points you mentioned were Harmon’s ideas. Jeff’s dad, moving more plots outside of the school. But instead of subverting those ideas, it looks like they’re going to just run with them and call it “meta”.

The most optimistic thing I’ve read about the show so far was “It’s changed so much that it’s basically a new sitcom, so we should give them a few episodes to find their footing, like any other new show”. After just typing that sentence, it strikes me how not very optimistic at all it sounds.

Anyway, have you read that Grantland article on what Harmon is doing lately? Fascinating and kind of off-putting.

Sorry but no. The show is still just as good without Dan. Last episode was better than most episodes from Season 3. So yea, no.

Sorry but yes. Everything was off in the first 2 episodes. The acting was like they were shooting the table reads. The first episode was just jarring and obviously turned off all the first time viewers that were checking it out (based on how few turned up for week 2) NBC must not have been thrilled with what they saw or they would not have screwed the show schedule-wise. Airing the Halloween show on Valentine’s Day?? No one could see that this was maybe a bad idea? I loved the show, but these last 2 episodes were not from the series that I loved.

I agree that this sason hasnt been amazing you cant blame it all on Dan Harmon leaving the best and funniest season by far is still season one. Season 2 was pretty good with some awesome episodes such as the flashbacks and bottle episodes; but season 3 was pretty god awwful and only the love that season 1 and 2 created for me has gotten me through it. I mean i had to see Britta totally destroyed as a drop dead sexy rebel into a dumbass bimbo airhead that does a dance for pizza just cause she has the munchies?!? Pretty sure Danny boy was there for all that and more..