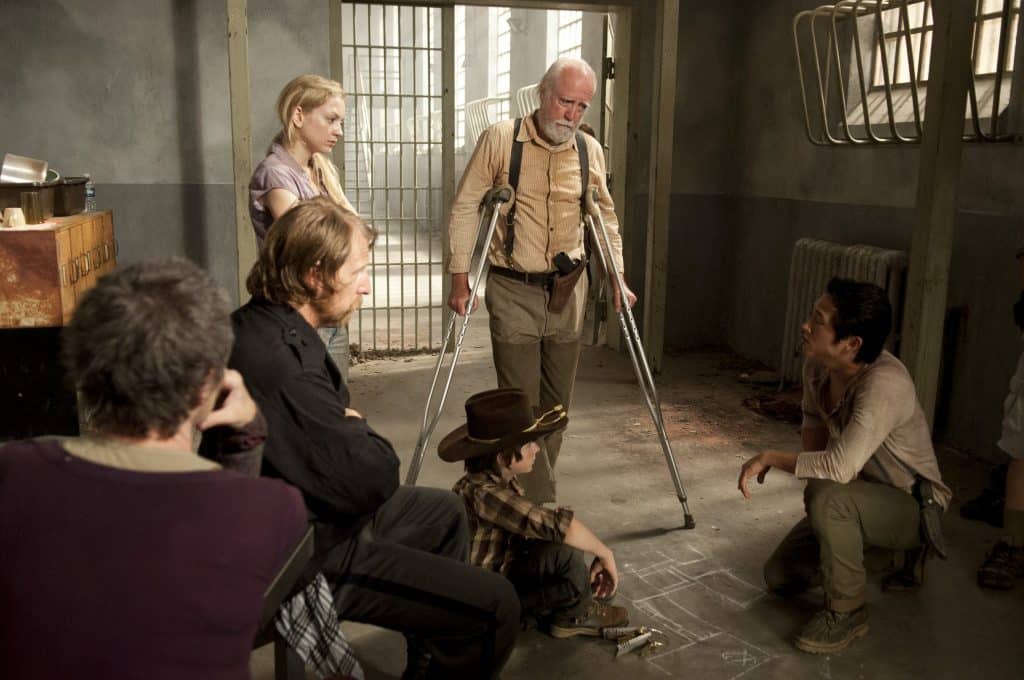 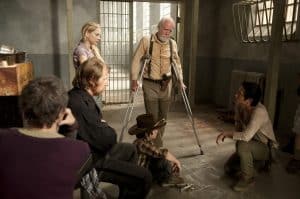 EOnline.com released a few spoilers for The Walking Dead Home (episode 10) in an article yesterday. One we already knew, but the others…

Here’s the critical section from the article.

Well, we already know from the Walking Dead Home clip shown during The Talking Dead, and the still (above) pulled from it, that Glenn is the one who shows “leadership.” Also, from Steven Yeun on Talking Dead mentioned that he makes a leadership mistake because he’s young and brash. So that’s the bad leadership move in Walking Dead “Home.” Andrea must be the Woodbury leader, and it would make sense she’d be better and more mature than Glenn.

The surprising death… Well, I think this might, in a way, tie in to the “melee.” If you read the comics, you know that Tyreese’s daughter and her boyfriend kill themselves. So I see the daughter, Julie, ending it all with a shot to the head. That surprising enough? Since they’d be close to the hole, and unexplored part of the prison, this would lead the walkers in. Tyreese would run to his daughter’s rescue though, once he hears the shot. Perhaps that shot comes from the Gymnasium… If you’ve read the comic, you know where I’m going with this. It would make the term “melee” much more appropriate here. They sure didn’t say “firefight.”

This is just speculation but that would be season 3’s highlight, in my opinion, if they combine these two things together.

Now, as for the Dixon brothers. I assume the EOnline story is referring to an actual location, not just a thematic “end up.” The only thing I can think of is the house Daryl came across when looking for Sofia. Maybe we’ll learn that Merle had something to do with her ending up zombie meat, perhaps through his own inaction. Daryl might decide to kill his older brother, thus being pretty damn “dramatic.” It might also be the “melee” the article refers to, and it would be a nice way to bring the “brother against brother to the death” back around.

We’ll see. I can’t wait for The Walking Dead Home as I was sorely disappointed by last episode’s lack of action and actual plot progression.

[…] yes, I was wrong about quite a few of my predictions. What the writers did instead was just fine and dandy, though, so I’m cool with […]