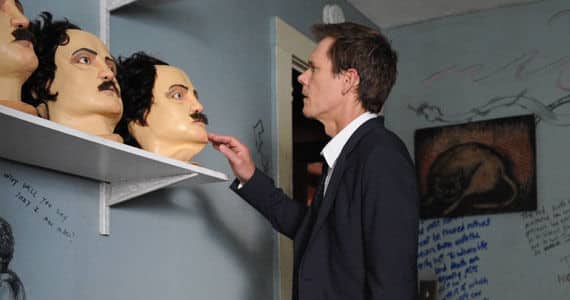 I won’t make the mistake of other The Following reviews and go on ad nauseum about Edgar Allan Poe and the killer inspired by him.

Because, let’s get one thing straight. The Following’s pilot, Jan. 21, was only good because Kevin Bacon was in it.

Let’s break down, quickly, just a few of the show’s problems. Incidentally, these are problems that can be seen in most television shows and movies about murderers and the people trying to catch them.

On paper, this was really a formulaic show with a high concept. Kevin Bacon’s skill and charm saved it.

The Poe stuff seemed, at best, thrown in to spice things up. Without a doubt, there are hundreds of bloggers and Internet folk feverishly researching Poe in order to bestow Kevin Williamson with accolades for his intelligence. Well, most of the references seemed to be stuff you were taught in high school. Really. The Telltale Heart? The Raven? This is required reading stuff. If knowing a lot about those stories could make you a super serial killer, we may have a problem.

By the way, I want to be the first to predict that the season finale will involve Kevin Bacon’s character being entombed, alive, behind a stone wall in a cellar like in “The Cask of Amontillado.” Meanwhile, one of the killer’s disciples will be rattling on about impunity… But, really, how much can be tapped from Poe’s archives? The guy died in his early 40s, didn’t publish a crazy amount, and if we’re being honest his writing wasn’t really the best inspiration for a serial killer. I’d be more impressed by a sane college professor losing it after reading James Joyce’s Ulysses for the 50th time. But, this guy is apparently a Romantic fiction expert. Maybe next season it’ll be revealed his followers and his devised killings are inspired by Victor Hugo. Wouldn’t that be totally credible? Yeah, his disciples will dress up as hunchbacks and knock priests off of bell towers. Makes about as much sense. Ugh.

But, the show did have one bright spot. Kevin Bacon. Kevin Bacon is best known for every movie ever made, and he’s especially known for always being good in every movie ever made. Even if he’s the only one trying. It’s about time he got his own show. He plays a broken cop, but he does it with the usual Bacon charm. Mmmmmm, bacon. In fact, he’s far more charismatic than James Purefoy, who looks and performs like he was dragged out of a pub at last call and put on set. “Oh, read these lines in an ominous voice? Ehhhh… OK.” In fact, after all of the talk about charisma playing such a big role in the killings and cult, I half suspected Bacon was going to be revealed as the real killer during the flashback where he ran into the soon-to-be victims. But, no, he was apparently just “following” Purefoy. Mwahahahahahaha. Get it?

I’ll watch the next few episodes. Bacon bought that much time for me. Let’s just hope the series tries to go somewhere other shows haven’t and doesn’t stall out because of its somewhat limiting high concept. I don’t have much hope.

can search the entire world without moving

an inch from his or her home. only requirement for such searchers is a computer with internet connection. so how do you go for the search when all these are available? here are a few tips.looking at the track record of