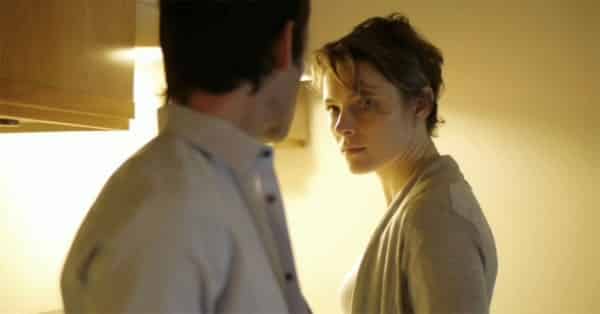 Primer came out in 2004. That’s nearly a decade ago. Now, finally, Shane Carruth is back with Upstream Color.

His new film, for which he served as director, writer, producer, cinematographer, composer, co-editor, and actor, is Upstream Color. Yesterday, team Carruth released the first theatrical trailer in anticipation for its premiere at the Sundance Film Festival tomorrow.

The film will get a wider release on April 5, but Carruth undoubtedly wanted to try to win his second Grand Jury Prize. Primer (now on Netflix instant stream) won nine years ago, rightly beating Napoleon Dynamite and Garden State. Upstream Color will be competing against the Ashton Kutcher Steve Jobs biopic and Joseph Gordon-Levitt’s Don Jon’s Addiction, among others.

Upstream Color has been under a bit of a shroud of secrecy. For instance, the most detailed synopsis we had for a long time was this from IMDB: “A man and woman are drawn together, entangled in the life cycle of an ageless organism. Identity becomes an illusion as they struggle to assemble the loose fragments of wrecked lives.” … OK. Doesn’t really tell me a whole lot. This recent one, from an LA Times interview posted yesterday, tells a bit more of the plot.

“In the movie, a young woman (Amy Seimetz) is abducted and seemingly brainwashed via an organic material harvested from a specific flower. She later meets a man (Carruth) and after the two fall for each other, they come to realize he may also have been subjected to the same process.”

Then there’s this, from Sundance’s web site: “Kris is derailed from her life when she is drugged by a small-time thief. But something bigger is going on. She is unknowingly drawn into the life cycle of a presence that permeates the microscopic world, moving to nematodes, plant life, livestock, and back again. Along the way, she finds another being—a familiar, who is equally consumed by the larger force. The two search urgently for a place of safety within each other as they struggle to assemble the loose fragments of their wrecked lives.”

Nearest I can tell from other snippets floating around the web, this film, theme-wise, is likely about either a) How early traumas in our lives can exhibit themselves later, after lying dormant, and how we can be attracted to others like us without even knowing it or b) Something only Carruth knows for now. Upstream Color refers to impurities that arise in the early stages of chemical production. I mean, really, try to make sense of this without studying four a doctorate. There’s the general correlation of “impurities,” but then Carruth throws in “lifecycles of an ageless organism.” Will there be more sci-fi than is at first obvious? It wouldn’t surprise me. Carruth seems to show a proclivity for sci-fi based in hard science, science that is usually overlooked for the more glamorous aliens and spaceships. But, then again, there’s no hard guarantee that Upstream Color will qualify as science fiction. We’ll have to wait and see.

But one thing that excites me more than the sudden torrent of information on Upstream Color is the news that Carruth has essentially given up on the project that took up his time post-Primer, A Topiary. To the LA Times, he called it “the thing I basically wasted my whole life on.” He may or may not intend to move forward with it (some reports say it’s screenplay is finished and awaiting financing), but it seems Carruth has moved on regardless. In my mind, this is the movie version of Axl Rose’s Chinese Democracy. An artist is such a hit and so takes his time creating a masterpiece, but then it’s taken so long that he feels it must be perfect, so he takes even more time — and so on. It seems he’s slayed that demon, by at least moving on in the meantime. He started and finished Upstream Color within about two years, and next year he’s reportedly set to begin production on The Modern Ocean (space?) this summer. He even helped on Rian Johnson’s Looper.

[For the curious, here’s the best breakdown (still very vauge) of the plot of A Topiary.]

Though many fanboys will ache for want of A Topiary, it’s better to have a brilliant artist working than working on something that may never be finished. We need more maverick visionaries like Carruth, and it seems he has his swagger back.

“I now know what I will be doing. I will be doing this,” Carruth said in the LA Times interview for Upstream Color. “I will be making films and I’m going to keep working, no matter what I have to do. And I don’t plan to ever ask for permission from anybody.”