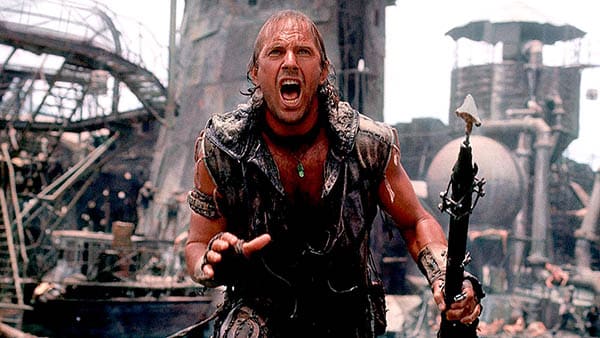 For 90s action movies, cinema moved away from the musclebound giants of yesteryear and embraced more relatable heroes.

The decade saw a fundamental change for action movies. Pitches got shorter and the concepts ever higher. It was a hugely fertile period for the genre. It gifted audiences with some of the best action movies ever: Point Break, Face/Off, The Rock, and many more.

But there were just as many titles that found themselves lost in the shuffle. During what has every right to be called the Golden Age of the action flick.

Not every movie gets to be a massive success. Nor do they enjoy the longevity that comes with critical acclaim and blockbuster success at the box office. We’ve dug through the archives to find 10 of the best underrated 90s action movies. These, at the very least, are well worth a second look.

How quintessentially 90s action movie is Judgement Night (1993)? Well, it stars Emilio Estevez, Stephen Dorff, Cuba Gooding Jr. and Denis Leary. When all four were still being pegged for superstardom. Features House of Pain‘s Everlast in a supporting role. And it boasts a soundtrack that includes Sonic Youth, Teenage Fanclub and a collaboration between Pearl Jam and Cypress Hill, which should tell you all that you need to know.

The story follows a group of friends travelling to a big fight in a luxury RV. They take a detour onto the wrong side of the tracks. They subsequently find themselves caught up in a drug deal gone wrong. The setup is fairly standard. And it isn’t high quality filmmaking by any means. As a result, Judgement Night flew completely under the radar and bombed at the box office.

There’s plenty of entertainment to be found in the movie. It is the kind of no-frills action thriller that the big studios don’t really make any more. Judgment Night benefits hugely from solid performances across the board, plus some decent thrills. To top it off, director Stephen Hopkins keeps the plot in a state of constant forward propulsion.

Denzel Washington and John Lithgow are two actors that very rarely give a poor performance. Never anything less than value for money. When you put the two of them against each other in a cat and mouse crime thriller written by 48 Hrs., Commando and Die Hard‘s Steven E. de Souza and directed by Highlander‘s Russel Mulcahy, all the ingredients are there for a great time at the movies.

Ricochet (1991) also found widespread critical acclaim when it first hit theaters in 1991. But has since been lost to the sands of time as Washington ascended to Hollywood royalty. The plot features an escaped convict seeking revenge on the cop who put him behind bars. IWe’ve seen the plot done a thousand times before. But the leads are just so entertaining and watchable that you can’t take your eyes off it for a second. Even as the narrative stretches credibility dangerously close to breaking point.

Brandon Lee will always have a place in Hollywood folklore due to his tragic death on the set of The Crow. But it was the movie he made directly before the comic book adaptation that first made people sit up and take notice that there might just be a new action star in town.

Journeyman director Dwight H. Little doesn’t exactly bring much visual flair to the proceedings. But it was hardly integral to making Rapid Fire (1992) a success. Not when the filmmaker had a handsome and charismatic leading man to rely on. One who not only inherited his father’s movie star genes, but also his talents for impeccable fight choreography.

The underrated 90s action movie’s plot is the least important aspect of the hidden gem. As always tends to be the case with these kind of movies. But the barrage of almost wall-to-wall fistfights and shoot-outs more than compensates for a generic cops and robbers tale, all held together by Lee’s true breakout performance.

Last Action Hero (1993) suffered commercially from coming up against the unstoppable box office might of Jurassic Park. But it failed on a creative level. Because the movie, originally written as a parody of the 90s action movie genre, instead became a parody of its own idea.

Zak Penn and Adam Leff wrote the screenplay as a pastiche of Shane Black‘s work. Only for the studio to hire the Lethal Weapon creator at great expense to give it a polish. One fitting for a star of Arnold Schwarzenegger‘s magnitude.

The meta narrative, self-aware humor and frequent winks at the audience were well ahead of the times. But there’s so much going on that none of it really gets a chance to stick. There’s just something so shamelessly ironic and ill-fitting about the director of Die Hard, writer of Lethal Weapon, and the star of The Terminator joining forces to make something like Last Action Hero. Enjoying something of a reappraisal, many movie fans see it as an unsung postmodern cult classic.

Timecop (1994) remains Jean-Claude Van Damme‘s highest grossing starring role. It was one of the last to score a big screen release before the Muscles from Brussels made the VOD realm his permanent residence.

The title concisely sums up the high concept. While the script isn’t strong enough to maximize the potential of a time travelling action flick, there’s enough brawls and suspense to entertain those willing to turn their brains off and suspend their disbelief for almost 100 minutes of set pieces and gaping plot holes.

The most expensive movie ever made at the time of its release, Waterworld (1995) holds a reputation as a box office bomb. But when one factors in home video sales, the $175 million misfire actually turned a decent profit for Universal. Plus, it’s actually not bad. In fact, it easily deserves a spot on this list of underrated 90s action movies.

The Extended Cut with over 40 minutes’ worth of additional footage is the superior version, but the theatrical edition still manages to get the points across. It may have been needlessly expensive and nobody in the cast with the exception of Dennis Hopper acquits themselves particularly well. But the massive sets and reliance on practical effects create an old-fashioned sense of wonder that was slowly being phased out of the action genre at the time.

Hardly a 90s action movie classic by any means. But there’s still enough to recommend about Waterworld that movie buffs can’t instantly dismiss it if not seen firsthand. Especially if all they know about it is due to the legendary tales of behind the scenes turmoil.

There’s a defiantly old school vibe about Ronin (1998), and it isn’t just because the lo-fi action thriller arrived at the tail-end of the 1990s when the CGI revolution was on the cusp of changing the genre forever.

The Manchurian Candidate director and New Hollywood veteran John Frankenheimer‘s work behind the camera is economical and perfectly suited to a story that’s constantly moving forward. Meanwhile a script co-authored by David Mamet under alias Richard Weisz keeps things moving at a steady clip and presents plenty of meaty dialogue for the ensemble to sink their teeth into.

The European setting and crunching vehicular carnage was a clear influence on The Bourne Identity, not to mention heavily indebted to Frankenheimer’s own French Connection II. The end result? A defiantly adult-skewing genre piece released at a time when studios primarily marketed action fare toward a younger demographic. A group easily tempted into the cinema by little more than explosions and one-liners.

Producer Joel Silver, director Tony Scott, writer Shane Black and star Bruce Willis were hardly strangers to the action genre, so The Last Boy Scout (1991) was guaranteed to be serviceable at the very least given the talent involved.

The reality is that the movie is much better than that, and ranks comfortably among Willis’ finest efforts in the genre. Despite the similarities to Lethal Weapon, Black once again manages to put a fresh spin on the buddy cop movie, teaming up a world-weary private investigator with a disgraced football player and letting the sparks fly.

The Last Boy Scout’s script is so strong that it genuinely had people believing that Damon Wayans was going to be a megastar. Meanwhile, Scott continued his hot streak as the man responsible for some of the most stylish popcorn movies coming out of Hollywood at the time.

Samuel L. Jackson holds almost 200 acting credits to his name, and admitted that The Long Kiss Goodnight (1996) is his favorite out of all of them, which is quite the endorsement coming from the single highest-grossing actor in the history of cinema.

Shane Black once again sticks to the tropes he knows best, but spins his usual odd couple dynamic into an espionage thriller played out in reverse, as Geena Davis‘ amnesiac housewife slowly uncovers both her past and the conspiracy tied to it.

The dialogue sizzles and the chemistry crackles between the two leads in what might very well be Black’s best ever script. To top it off, the third act culminates in one of the most impressive displays of pyrotechnics ever committed to film.

Unfairly dismissed as “Die Hard during a flood,” Hard Rain (1998) bombed at the box office despite being one of the finest action movies to come along during the mid-to-late 90s glory days of the genre.

Christian Slater gives his best leading man performance ever, and reminds you why Hollywood was once so desperate to elevate him to the very top of the A-list, while Morgan Freeman takes a rare villainous role and brings all of the gravitas you would expect.

The action is all achieved in-camera, which is even more impressive when you consider the logistics in mounting a blockbuster set almost entirely during a deluge of epic proportions. The script from Speed‘s Graham Yost is exactly as high in concept as his previous effort. And the ensemble cast is filled out by recognizable character actors making the most of their one-note roles. Hard Rain is one of the most unfairly overlooked and severely underrated action movies ever made.

The 90s were a fun decade for the movie. Plenty of action, lots of adventure, and some all-time greats. Sure, the movies on this list may not deserve awards or billionaire-success, but they’re quality action movies nonetheless.

Did we miss one of your favorite underrated 90s action movies? Let us know in the comments below!