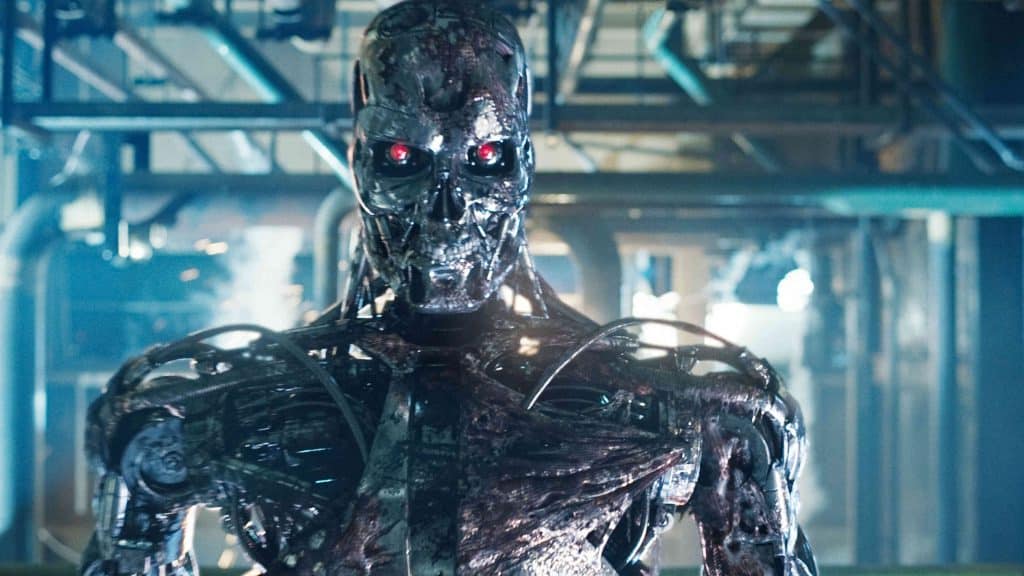 The singularity, otherwise known as Dawn of the Planet of Computers, has been predicted for years. All we’ve received thus far are chat bots.

So it’s no surprise that every bit of AI news gets turned into singularity news. Earlier this week, the University of Reading announced that Eugene Goostman–an AI designed to replicate a 13-year-old boy–passed the Turing Test for the first time. The Internet went “woah” and then many (not all) moved on about as instantaneously as you might expect.

But these things have a way of adding up, and some may have walked away with a false impression of what constitutes a Turing Test. Because, it’s not the same as the kind of tests a T-1000 faces in order to pass Skynet’s stringent quality assurance guidelines.

It’s a similar problem with things like Siri and the new Cortana digital personal assistant for Windows’ mobile platform. Or even Watson, the Jeopardy-winning supermachine. Many of us have been confusing imitation with simulation.

Let’s take a look at our most modern AI, primitive chat bots, and how they compare with the singularity.

No, not the character actor best known for his work with Paul Thomas Anderson and Steven Soderbergh.

Eugene Goostman is the creation of a team from Saint Petersburg, Russia designed to pass a Turing Test–tricking humans into thinking it’s one of the species by cleverly disguising itself through a series of interrogations.

A Turing Test is basically a sniff test. “Seems legit” is about the most scientific a good result gets. The bar to surpass is 30 percent fooled, and it reached 33 percent.

But here’s some advice to anyone who, like me, has a tendency to get over excited. Seek out the skeptics. They will crush your dreams (or alleviate your fears) every time. Then, there’s the fact that some call foul with the way the test was administered.

If you thought Siri was great but you really value back stories in your digital personal assistants, then Windows Phone 8.1, the new Windows mobile operating system, is for you.

Even those who have never played Halo benefit from Cortana being based on a pre-existing intellectual property. If a company invented a personality, would you trust it? Personally, I would not trust Ronald McDonald to tell me about the best places to eat. But just having the knowledge that “this is based off something my grandson plays” makes everyone feel a little better about it.

But the real technological kicker here is that the development team says Cortana learns, and the tech is really aided by the work Microsoft has done with Bing in the realm of semantics. That’s always the goal of AI, and it seems like every AI product promises this feature as a result.

We’ll have to see if the programming behind Cortana could lead to a real life Cortana, in a crazy example of life imitating art, or just another basic chat bot. We’ve got a big head start on the Halo timeline, so no sweat.

This is a very sweet idea (Bina was a real person), but this robot is admittedly very creepy. You may know Bina48 from nearly everything that talks about robots and AI. She made an appearance on The Colbert Report recently as part of the story/skit on Eugene Goostman.

Bina48’s not perfectly convincing, but it is pretty neat. Because there’s also the physical aspect, it has a bit more street cred than Goostman. Still, Bina48 can’t stop being Bina48. She can’t decide to stop eating unhealthy snacks at lunch and decide to start amateur black-and-white photography to express her ennui.

Fictional Locations: 12 Made-Up Destinations We Wish We Could Visit

But Bina48 also represents the other side of this AI stuff. It’s not all about doomsday. It’s also about the afterlife. We can’t hope to download our consciousness in order to escape death unless we can figure out how to replicate a personality. So this is an important step, complex chat bots that can mimic attitudes and mannerisms.

And the folks involved are dedicated to bringing the project the rest of the way, even if takes a while. They’re also, obviously, awesome roboticists. Their work, including the Philip K. Dick recreation, look and act great from what I’ve seen. Still, they’re not quite all the way to sentience, or even within stone’s throw (said millions who claimed the Earth was flat).

In the meantime, it makes for an at once hilarious and thought provoking Colbert Report segment.

Well, if Jeopardy is your measure of ability for world domination, then last January Skynet couldn’t stop saying “bullshit.”

Wilson is great at learning certain stuff. Better than any AI we’ve seen in practice, though it’s certainly nowhere near a consumer technology. But it’s great at chess, Jeopardy, and even cooking–though I double dare you to be the first to taste it if Wilson invites you to dinner.

5 Best Lighthearted Films About the Apocalypse

Anyway, researchers gave Wilson the supercomputer, one of our best hopes for reaching AI that’s sentient within our lifetime, UrbanDictionary.com to nom nom nom on. Turns out he couldn’t figure out what was a good word and a bad word, though word is still out whether he’s just going through a difficult pubescent phase right now.

Although, Wilson could be considered too complex to be lumped in with chat bots. However, it was designed to answer questions inside of a game. The goal is supplied from outside and its primary objective is to answer like a human (a brilliant, possibly evil, human). Can we agree Wilson has more in common with Eugene Goostman than Haley Joel Osment from that movie everyone hates?

Are We Doomed If Chat Bots Pass the Turing Test?

Relying on the Turing Test is silly. It’s a nice measure of effect, but not of actual ability.

Let’s imagine a scenario where a Terminator wants to kill you through hijinks, like knocking on your door and then proceeding to pretend it’s a mailman or something.

The doorbell rings. You answer.
“Can I help you?”
“Hello. Nice mail today, yes?”
“Uh. Yes. I suppose I have been needing Bed, Bath & Beyond coupons...”
“And will you be having any killing with your stamps today?”
“No, thank you. Wait... How much? No, nevermind.”

As clever as the robot in that scenario seemed, and better scenarios that make sense, there’s a problem. Responding to inputs, like chat bots can, does not make a sentient being. Wanting to kill John Connor, and finding ways to overcome obstacles to achieve that goal with complete autonomy, is sentience.

A great article titled “Hyping Artificial Intelligence, Yet Again,” written by Gary Marcus for the New Yorker, does a great job arguing the point that hyperbole surrounding AI holds back advancement due to financier overexpectation. It’s a great read, and it’s important for those of us with blogs who can spread irrational exuberance–not that there aren’t abundant times and places for robot overlord jokes.

Another issue to consider, one touched upon in Marcus’s column, is how things like irony and sarcasm, deeper shades of which make up the majority of the human condition, are still out of grasp for AI. IQ tests with verbal skill tests have consistently slayed AI and for good reason. They’re just fact processors, not meat puppets like us evolved mammalian lifeforms.

TL;DR version: we have all of the feels; humans rule, robots drool. For now.

Crossing from Chat Bots to AI

So if everything thus far is still pretty far from the singularity, how will we know when we actually reach a crossing point? It’s hard to believe in Skynet anymore when we’ve taken so well to technology in the years since October 1984.

Her by Spike Jonze is not only a brilliant movie, it’s probably the best up-to-date prediction we have for how we’ll be introduced to true Artificial Intelligence–if that’s even possible. I mean this for the layman, in the same way PCs introduced us to computers. Sure, some research universities, and certainly the military, will have the first use of any AI technology.

Altered Carbon and Morality: Who Wants To Live Forever?

But Her is a window into how we would engage with something sentient.

Not that the movie’s purpose is to make a point about Turing Tests and metrics, but it does boil down the issue to a simple measurement. If you can love it, not because you’re weird, crazy, or dumb but because you’re lonely, then AI will have reached the zenith of our understanding. Although, at what point will be start to fall in love with chat bots?

SPOILER WARNING (highlight text to read): The ending is a bit metaphysically mystic, but hell, it certainly deserves kudos for departing from the usual “Move over, humanity” endgoal.

Conclusion: Should We Fear Chat Bots?

Artificial Intelligence won’t come via chat bots. It won’t be created to delight humans by answering questions like a 13-year-old European.

All of this helps push forward AI in increments, and the Internet is fantastic at measuring incremental progress, but surely true artificial intelligence has to be based in part on sensory data and the sensors themselves. That’s where the future of AI stands, I’ll go ahead and proclaim.

A computer that can see, hear, smell, feel, and maybe even taste, will allow AI to really take off. Especially if it can know when to lie and say the pie tastes fine.

It could potentially be as frightening as Skynet, but that’s tantamount to saying that a group of baby geniuses would automatically want to purge the Earth of humans (your move, Hollywood). There are tons of scenarios where AI would see humans as a threat, to themselves, to the world, or to robotkind, but there are just as many scenarios where we could live beside the lifeforms we create.

We just have to make sure to give them cool names like Goostman so they look fondly upon us when the Great Choosing begins.