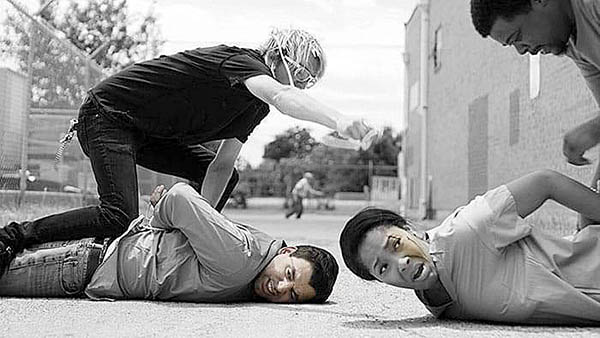 Monochrome: The Chromism Worth More Than Its Budget (Review)

Monochrome: The Chromism’s crew is a genuine group of people who came together around a passion project to make something ambitious and different on a shoestring budget of $2,000.

Given this fact, I would dare anyone to try to do the same amount of work for the same budget and even come close to looking better than this. That said, Monochrome: The Chromism suffers from a weak narrative structure that undermines its ambition and hampers its ability to effectively convey its message.

First Impressions of Monochrome: The Chromism

My first thought on Monochrome: The Chromism was its title. “Monochrome” suits the film, which plays out mostly in black and white, but what is a Chromism? It’s a chemical reaction that causes change, often reversible, in the colors of compounds.

So, essentially all the title has set up is that color will be brought to black and white, which is what happens on the surface. This doesn’t set up a good expectation for what I’m getting into as a viewer. I’d rather they’d have gone with something a little more descriptive of the substance.

I continued on my first viewing uncolored (pun intended) by knowledge of the love the community has for this project. Confusion set in as I watched the opening, trying to make sense of the details presented by a voiceover from the protagonist Isaac Ward (Joshua Bangle).

Hues? War, violence. Isaac walks into a dive bar with signs that read “No Hues” reminiscent of the signs that used to hang outside of bars and other public places during the times of Jim Crow and segregation. I braced myself for a racism metaphor. I wasn’t disappointed.

Continuing on, we go into a flashback from a year before. But there are more questions now. Who are these people making a virus? Why are they making it? How did it spread fast enough that Isaac is infected if the events happen simultaneously?

Since it’s sci-fi, there’s a certain amount of disbelief that I am willing to suspend. But there are a lot of holes to fill in the narrative. Even when presented with answers to some of these questions, they feel vague.

Stand-Out Scenes in Monochrome: The Chromism

While many of the scenes that comprise Monochrome: The Chromism are fairly weak in terms of memorability, there are some stand-outs. The news anchor, whose name we never learn, takes matters into her own hands when it’s clear her husband has been infected with the virus and becomes aggressive.

While this scene did nothing to further the plot, as the substance had already been impressed upon the viewer earlier, it did provide some much needed female empowerment.

In another scene, an extremely infected Jerry (Ryan Barnes), Isaac’s brother, kills their mother and father while Isaac is restrained. IWe also learn that Jerry killed Victoria, Isaac’s fiancé. This is the point where Jerry steps over the line into the villain role. Both Bangle and Barnes display some good emotion.

The former scene leads to a chase into an abandoned warehouse, the climax, which contains the best dialogue in Monochrome: The Chromism. While it doesn’t do much to clear up any lingering questions, it does offer the most in-depth look at the intentions of the film’s premise.

“They said you would do this. They said you Hues would resist. That we should stay vigilant. Stop the infection. Build this new world.”

These are Jerry’s words while he hunts down his own brother. Because he believes that it’s the right thing to do after being told as much. The virus is symbolic of destructive rhetoric that turns otherwise rational people into brainwashed monsters. This fits especially well given the divisive 2019 political climate when Monochrome: The Chromism debuted.

The Characters in Monochrome: The Chromism

Issac Ward, the protagonist, is as monochrome as the title, and I wasn’t sure if that was intentional. After he gets shot and contracts a virus made by an unknown shadow organization for an unknown purpose, his skin begins to “glow.” It wasn’t until this scene that I realized this broke the rules of the world. Because they hadn’t been firmly established. I personally enjoyed his voice overs more than his on-screen acting.

Jerry Ward is a fantastic character with good voice inflection and real screen presence. Though made out as the antagonist of Monochrome: The Chromism, I felt more for Jerry than I did for Isaac. The latter spends most of his screen time either in a hospital bed or running. Jerry’s character arc from concerned brother to mind-controlled victim lured into killing all of his loved ones is the truly heartbreaking story.

Donovan (Devin Leigh) is portrayed by a decent actor, but his role suffered from a lack of gravitas. Because of the mystery surrounding the character and his intentions, he doesn’t feel grounded. This lack of grounding doesn’t make his actions believable. Rather, it paints him as a cartoonish antagonist who lacks any clear motivation beyond doing what he’s told by “Them.” I wanted to love to hate this character, but Leigh’s performance is the only thing that gave him substance.

Technical Aspects of Monochrome: The Chromism

I was impressed by the cinematography of Monochrome: The Chromism. Say what you will about the acting, the script, or the story, but Kodi Zene knows what he’s doing with a camera.

The visual effects, and editing are excellent for a small indie film. It truly deserves the award of excellence it received for cinematography. Shots are tight. There’s no unfocused nonsense. And the color saturation on skin and blood when viewing “Hues” is one of the most interesting things about Monochrome: The Chromism.

After I learned of the budget Monochrome: The Chromism operated under, I became far more impressed with the sets. Some indie filmmakers actively break ordinances, or even heavier laws, in order to secure locations for filming and stay under budget.

The fact this crew could shoot in some of its locations speaks to the amount of love and goodwill put into this project. Doing many things with few resources is one of the hardest aspects of the art of filmmaking. But Zene was able to squeeze every drop from what he had to work with.

Final Thoughts on Monochrome: The Chromism

Monochrome: The Chromism is a direct product of our times. The protagonist is a victim of circumstances beyond his control. He is a completely rational man “immune” to the effects of destructive rhetoric fighting against the irrational, gaslighting masses. Those who breathe in toxicity and expel hatred for an enemy chosen, not by the masses, but by a shadow organization that exists only to perpetuate its spread.

That being said, it was hard to gather this message without watching the film a second time. It needs a stronger, tighter narrative to really deliver its message. It has little to do with the acting, or the sparse sets, and everything to do with worldbuilding.

Monochrome: The Chromism gives us very few details to really delve into this universe. It’s a shame, because it seems like it’s almost there.

It’s apparent that the Monochrome World is an alternate universe from our own. But the elements that comprise it–the organizations, the nations, and to a lesser extent, the people–are too familiar to establish it as a world apart. The entirety of the premise is that this world is like our own. But has no color until it is introduced.

I would have preferred the filmmakers take their cue from the dystopian classic Nineteen Eighty-Four by George Orwell. For instance, Orwell’s shift from the Department of Defense/Department of War to the “Ministry of Peace.” Much the same could have been done with Monochrome: The Chromism’s references to institutions such as the Center for Disease Control. If you’re going to make a dystopian world that breaks the rules and creates new ones, go big.

Sci-fi, especially as it pertains to providing commentary on real-world issues, is infinitely more effective the farther you get from reality. The more you remove your audience’s perceptions of reality, the more receptive they will be to look upon the ugliness of human nature, and be disgusted. Presentations that are too on-the-nose stop people who disagree with your message from examining themselves.

Kodi Zene has crafted a fine film from the bones he had. In part, because of the dedication of its fan-base that helped to self-fund the project. And also in part because of the technical abilities of its cast and crew.

There are plans for sequels to Monochrome: The Chromism, a comic series that focuses on the year of time between the first and second film, Monochrome: Mask of the First.

I applaud the ambition of this team and their willingness to go all-in on this project, but I worry that the shaky foundations they have laid for its base will hinder its future.

Monochrome: The Chromism releases on Blu-Ray/DVD and streaming on Amazon and more Oct. 16.